Beware of the Batcave

Dean should never be left to explore the Batcave 's treasures - it never ends well.

Following are a little series of  drabbles written in response to a weekly drabble challenge that runs over on fanfiction.net: 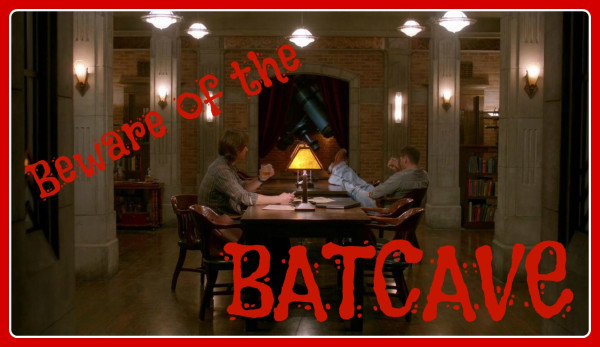 Dean knew he should have known better, but when he found Samson's comb in the basement, he just couldn't resist a quick brush.

But now he was peering into the mirror from under long silky bangs which hung down over his face and tickled his nose. He scowled at the long lustrous locks that swirled around his shoulders, framing his face in sleek, dark-blond tresses.

"Uh Sam," he called sheepishly; "I think I …" The words died on his lips as Sam appeared before him, furiously pointing to the gleaming cueball that was now his head.

"You think you've got freakin' problems?"

Sam glared down into the bathtub at Dean.

"Don't look at me like that," Dean snapped as the massive silver fishtail that had replaced his legs slapped the water.

Sam shrugged. "How, then, am I supposed to look at the jerk who found Triton's conch in our vaults and decided to try and play Highway to Hell on it?"

The bathwater swirled as the fishtail lashed menacingly. "When I can get outta this tub, I'm so gonna paste your ass," Dean snorted ingraciously; "until then, bitch, make some lunch."

Sam turned with a resigned sigh.

"NO GODDAMNED SUSHI," Dean called after him.

Dean didn't get why Sam was so pissed.

I mean, when a man finds a hat he's gotta try it on, right?

How would Dean know the Helm of friggin' Hades made him invisible?

He only realised when he turned to the mirror and saw, well, nothing.

And he squeaked out a shocked yelp ...

And slammed into his invisible brother with the force of a wildebeest stampede.

Staring woozily at the swirling ceiling, Dean had to concede that the helm was useful for preventing multiple skull fractures

Challenge - mention an animal in your drabble

"Dean, this incantation won't translate itself."

"I only wanted to see how it sounded."

"Yep, and it gives a whole new meaning to 'the pile on the carpet'!"

Hugging his coffee mug, Sam sat down at the table opposite his brother.

"Hey Sam," Dean announced; "did you know we had Charles Fort's ashes in our vaults?"

"The greatest ever researcher and chronicler of the supernatural?" Sam gasped in excitement; "the Godfather of hunting?"

"I'm tryin' to tell you," snapped Dean; "I broke his urn, so I put the ashes in the spare sugar caddy for now."

"You've just put two spoonfuls of our Godfather in your coffee."

Sam had been skeptical at first.

But, now with Dean standing before him, wiping sticky, turkish-delight flavoured fingers on a snow-flecked fur coat that completely engulfed him, somehow it didn't seem so bizarre.

It was the Batcave, after all …

"So," Sam sighed; "you got to Narnia through some crappy old wardrobe you found in the basement?"

Dean nodded with a grin.

"It slammed shut behind me," came the muffled voice from inside the locked mummy-case, the final resting place of the pharaoh, dhueshb'haag, whose cobweb-strewn earthly remains were now unceremoniously propped against the wall.

Sam sighed; "can you breathe?"

"In my pocket," snorted Dean impatiently.

"C'mon Sasquatch, shake a leg; it friggin' stinks in here!"

Juggling his beer and the remote, Sam slumped contentedly into the couch for a Dean-free episode of Downton Abbey.

He was thinking, honest.