Why does the rabbit always get screwed in the deal?! The poor little guy. 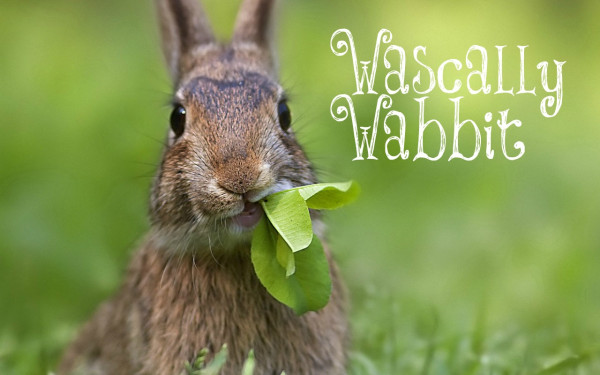 
BEWARE OF THE BUNNY

Sam knows that Dean never overreacts when things go wrong. But maybe the rabbits ought to look out ...

Sam spun round at the sound

He knelt beside his prostrate brother. "What happened bro'?"

Sam studied the offending hole, still containing the toe of Dean's boot; "I saw you stumble, did you hurt yourself?"

Dean glared … "no Sammy, I scream and clutch my friggin' ankle all the time!"

"Is it broken …?" Dean groaned irritably.

CARRY ON MY WAYWARD BUN

The boys have never enountered a hunt quite like this one ...

Sam stared in disbelief at the huge snuffling beast which loped past them.

"Is there anything covering this in Dad's journal?"

"It's a ten foot chocolate rabbit with a voracious appetite, aggressive tendancies and a pink candy bowtie," Dean replied curtly; "what do you think?"

"Hey Sam," Dean's voice drifted from behind the Impala; "have we got any marshmallows?"

"Marshmallows?" Sam echoed, as Dean rummaged in the tightly-packed trunk; "what the hell for?"

"Cos, Sammy, we're gonna have us some serious hot chocolate!"

NIGHT OF THE LEPUS

The creature had really laid into Dean.

My heart froze as he crumpled, shocked and dazed, into my arms; but he had taken one of it's eggs, so I suppose you can't blame it.

A vicious bite had opened his cheek, and I could see three long gashes across his chest, but with all the blood, you couldn't tell where his shredded T-shirt ended and his skin began. Gripping him tightly, I gently lowered him to the ground, cringing as I felt broken ribs grinding beneath my hands.

I can't believe Dean got whaled on by the Easter Bunny.