The Food of Love

THE FOOD OF LOVE

Dean has a complicated relationship with food; Sam's only just figured it out.

He used to prickle with heated irritation as Dean ate with the gluttonous finesse of a man starved.

That was before he knew.

Before he knew that Dean had regularly gone without so he could eat.

When the meagre funds John left them dwindled and all that remained was one slice of bread, one can of spaghetti, one portion of Wheaties; it was always Sammy's.

No question, no debate.

Sam's not embarrassed any more ...

Sam remembered admonishing Dean after he stole a box of fish-sticks from kind Mrs O'Shaughnessy's grocery store while John was delayed on a hunt in Kentucky.

The boys liked Mrs O'Shaughnessy; she called them darlings and Dean soaked up her affection like a bone-dry sponge.

It tore him apart to do it; he'd been sullen and prickly for days afterwards, and Sam had judged him harshly.

That was before Sam understood.

Before he understood that Dean had only stolen from her because he thought if she caught him, she'd understand.

She wouldn't make the cops take him away and leave Sammy all alone.

Sam used to ridicule Dean's eating habits. He used to call him 'A human trash-can'; 'a gut-bucket'; 'an eating machine'.

He'd been disgusted by Dean's food choices too; mountains of sugar-laden grease that turned Sam's stomach.

That was before Sam realised.

He truly hadn't known where his next meal was coming from.

Now Sam does everything in his power to ensure that Dean never knows hunger again. 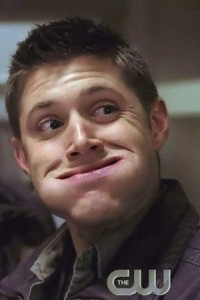