Here's a little ficlet written for the Spn Big-Pretzel Hallowe'en Comment Fic Challenge, only it's not quite little enough to qualify as a comment!!!

Dean really wants to celebrate Hallowe'en; of course, Sam's going to suffer as a result - maybe he's not the only one.

Disclaimer: I don't own them, however much I plot and scheme.

Sam stared incredulously at his brother, trying to ignore the pleading whine in his voice, hoping against hope that this was just one of Dean's flights of fancy; "But Dean? Trick or treating? Really?"

"Yeah, just think of all the cool candy we can get," Dean gushed; "we'll get enough candy to last us a week!"

Sam stared flatly at Dean. "a week? Like I'm gonna see any of it; it'll last you ten minutes," he corrected.

The snark sailed smoothly over Dean's head; Sam was sure he heard a faint whistle as it went.

"Hey, I wonder if anyone ever gives out pie?" Dean's face lit up with gleeful anticipation; "that'd be awesome!"

Sam squinted and pinched the bridge of his nose; damnit, how the hell did Dean do that? The man was thirty five – and here he is, all big eyes and toothy grin, looking like a freakin' ten-year-old on a sugar rush.

"Alright," he sighed; "so assuming we did decide, in a moment of madness, to do this, what the hell would we wear?"

His brow furrowed as a faint blush coloured Dean's cheeks.

"Well, I was just drivin' back from the multi-mart earlier today," Dean mumbled; "and I passed a fancy dress costume store and I kinda just, well pulled over, and I thought, well, it won't hurt just to look and I just sorta …"

His voice trailed off as he held up his two acquisitions.

"Batman and Robin?" he croaked.

"No jerkface," Dean grunted impatiently; "as in Romeo and Juliet."

There was a brief pause during which Sam did his best not to stare at the outfits hanging from Dean's outstretched arms.

He knew that Dean had never experienced the simple joy of trick or treating. So much had changed since they discovered the Batcave and Dean was experiencing a degree of normality (well, as normal as things got in the Winchesters' world), that had been missing from his life for so long.

Apparently, going trick or treating was just the next step in that process; an empty box that had to be ticked.

Sam longed to say no; every fibre of his being wanted to refuse and tell Dean to stop being such a jerk, yet somehow the words just wouldn't pass his lips.

Damnit to hell … and people accused him of deploying the puppydog eyes of death to get his own way?

The grin that split Dean's face was beyond radiant.

Batman and Robin stood in the Batcave's cavernous gallery.

Sam vowed not to wear this costume a second longer than he had to; even though it was an extra-large size, it still wasn't designed for someone of his dimensions and was pinching in all sorts of holy batplaces that Sam really didn't want to think about.

As he stood, rearranging his groin for possibly the seven-hundredth time, a dawning realisation settled over him.

Too big for his costume. Big. Sam was big. So was Dean; a veritable man-mountain as he stood before Sam, resplendent in his disgracefully figure-hugging black costume, complete with extra padding … at least Sam hoped it was extra padding; he was sure Dean's pecs and thighs weren't really that shape.

"Excuse me?" Dean's eyes widened behind his mask.

"What are people gonna do when two hulking great guys dressed as Batman and freakin' Robin turn up on their doorstep? We'll be lucky not to get arrested."

Sam sighed as he watched Dean shrink a little within his outfit; even from underneath his mask, Sam could feel the disappointment rolling off his brother.

"It'd be a bit more acceptable if we knew a kid we could take with us," Sam smiled ruefully; "at least then we could say they were our niece or nephew or something."

A glum silence settled between the two men.

Although undeniably relieved by this apparent reprieve, Sam couldn't help but feel a little sorry for Dean who stood before him, staring gloomily at the floor, a picture of black, lycra-clad despondence.

He was about to head back to his room and gratefully peel off Robin's tights, when Dean suddenly glanced up at him.

Sam didn't have to know what Dean was thinking; he could see from the upward quirk of Dean's lips and the twinkle in his green eyes as they peered out from behind the mask, that this meant bad news.

"We don't know any kids," Dean begin hesitantly; "but what if we could find some sawn-off little half-pint who could pass as a kid in the dark?"

Sam cocked his head quizzically as Dean glanced sideways across to the library where Kevin was busily beavering away over the Winchesters' latest angelic issues. 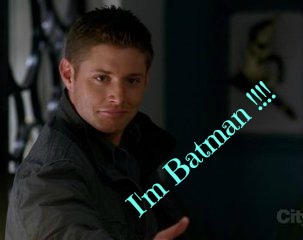