Hallowe'en Challenge: Invent your own monster. A little challenge I wrote for Hallowe'en 2013.  I thought as we are heading toward Hallowe'en 2020, I'd give this little relic an airing!

Sam discovers a whole new level of gut-churning horror when the brothers have a run-in with an entirely new creature.

Disclaimer: I don't own them; I did, however, invent the Squee - how lucky am I? 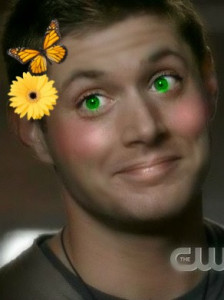 "A Squee?" Sam hissed into the phone; "what the hell is a Squee?"

"Let me guess," Bobby continued; "Dean trod on the damn thing and pissed it off; now the great lunk looks like the lovechild of Bambi and Princess Bubblegum?"

Sam glanced across the motel room to where Dean sat on his bed, gazing lovingly back through huge doe eyes which shimmered in the gloom like liquid emerald. He smiled bashfully, a soft blush colouring his apple-round cheeks as he put down the daisychain he was making.

Rolling his eyes, Sam turned his attention back to the phone.

"It's cutsiefied him," Sam groaned; "he's like Barney the freakin' dinosaur on crack; he's all big anime eyes, and rosy cheeks, and keeps telling everyone he loves them."

Bobby sighed quietly; "there ain't much lore on these things," he began; "I know they're a type of faerie, an' faerie spells normally wear off over time. S'easier to wait than tryin' to gank the damn thing."

He could almost hear Bobby's shrug.

"He skipped across the parking lot to the room, Bobby" Sam snapped; "SKIPPED!"

"Well, keep him inside while he's all 'My-Little-Pony' then," Bobby grunted.

Sam's voice dropped to a whisper; "Bobby, he said you're his big chumbly cuddle-bear and when he sees you again he's going to squeeze you 'til you pop."

"Where'd'y see this darn thing?" Bobby's voice was tight with panic; "I'm gonna find the fluffy sonofabitch and blow its friggin' brains out."