To my deepest shame, I realised at bedtime yesterday that I'd forgotten that it was International Rabbit Day 2020.

As we, here at Dizzo's journal, are lovers of small twitchy-nosed, long-eared chumblies, almost as much as we are lovers of sexy hunters, I could not let this day go unmarked, albeit a day late...

So here is a little triple drabble of Dean being adorable with bunnies!

"Dean ... what the hell?"
"He's a rabbit Sam."
"I can see he's a rabbit, what's he doing under your jacket?"
"I found him roaming around outside as I was driving by. No idea where on earth he's come from. He's not a wild rabbit 'cos he's black and white, maybe he escaped from someone's yard or got dumped or something. Whatever, I didn't wanna see him get run over or eaten by a coyote, so I thought I'd bring him home, then we can take him to a shelter."
*grins* "You're such a sap, Dean."
"Shuddap."
"I'll go get a carrot."
"Backatcha Sasquatch!"

"So, now we're keeping him?"
"Yep, Roger's my house-rabbit Sammy."
"Right …"
"I'm going to buy him a rabbit crate so we can shut him in safe when we're not here. I've done a load of research on the internet; he's a fully-grown Dutch rabbit. I've got a list of healthy food for him – he's not allowed lettuce, oh, and he'll need a myxomatosis shot. Then I'm gonna fence off that patch of earth behind the bunker so he can go outside for some sunshine occasionally; it's good for his fur."
"Wow. How come you don't research our hunts like that?"

"Dean, wake up."
"Nguh?"
"There's something you really need to see."
"What?"
"It's Roger …"
"WHAT? Roger? Is he sick? If something's hurt him, I swear I'll search heaven and earth to find their ass and kick it into hell."
"No, he's fine, well, kind of …"
"Sam, what the heck are you talking about?"
"Well, you know all that research that you did?"
"Yeah?"
"I think you may have missed something pretty important, look."
"Sonofabitch!"
"Yeah, it looks like you might have to choose Roger a new name, Dean. Oh, and congratulations – you're a Grandpa!" 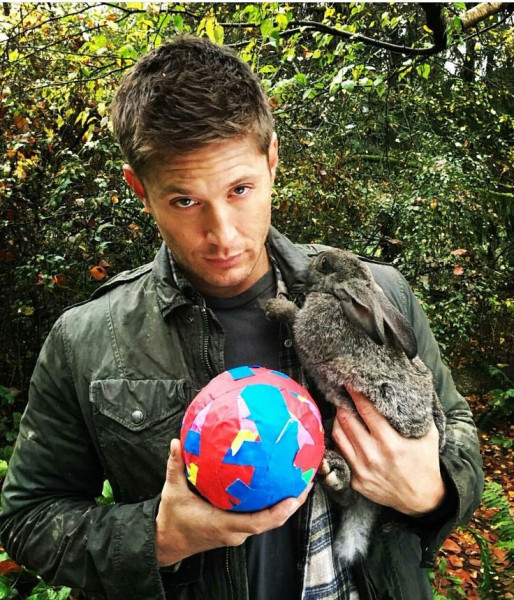