Whoever would have thought that pixies could be so touchy? 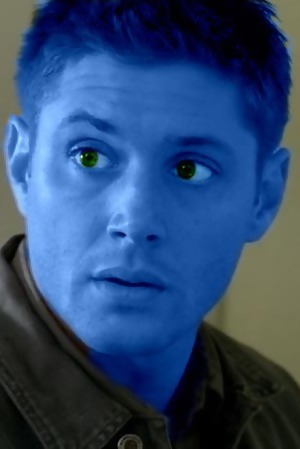 Honestly, Dean really wanted to tear its freakin' head off.

He'd only called the pixie 'a stupid little smurf'. How was he supposed to know it would take umbrage and use its douchey pixie magic to exact a cruel and totally unjustified revenge.

It had turned him blue.

Yes, that's right, all over; the term 'blue balls' had suddenly taken on a very disturbing new meaning.

Dean even had blue freckles.

Through poorly-hidden tears of hilarity, Sam had spent the last few days reading enough about pixie magic to be confident it would fade soon and his sulking brother would then be back to his natural shade of creamy tan with a hint of pink rather than his current, rather fetching hue which was hovering somewhere between cornflower and cerulean, (and no, Dean was not impressed in the slightest by Sam's knowledge of colours).

Until then, Dean was going to sit in the motel, hidden from the world and simmer grumpily; and if he heard another gloating refrain of 'Blue Moon' from Sam's direction, then he was gonna go one better than the pixie - Sam, the smug bitch, was suddenly gonna end up black and blue.