I was so lucky that my story, A SIght for Sore Headlamps, was picked up by

And she delivered this awesome work that captured the mood and the fun of the story perfectly!

Please leave her some well-deserved love!!! 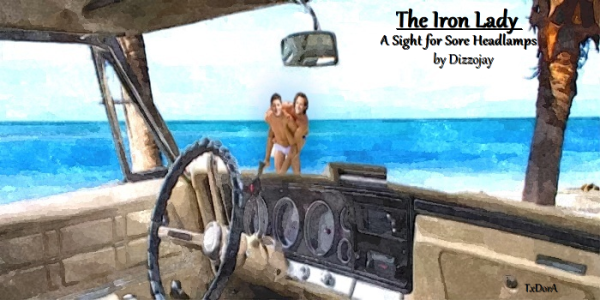 Is it theoretically possible for a car to die?

Just asking for a friend, y'know …

Well, it all started three days ago. My boys had come into a bit of cash, (a few good nights down at the pool table), and decided, on the spur of the moment, to take a vacation. So they packed up a couple of bags, piled them into my backseat, and off we headed down to Florida.

We drove pretty much for three days until we got here. Fine by me, of course; Dean keeps my engine in fine fettle, and hey, those boys deserve a vacation, oh heck do they deserve it.

They booked into some tiny little motel right on the seafront here at Pass-a-Grille Beach, chosen especially by Dean because it's a foodie's paradise. Apparently it has beach cook-outs every night and 20 different ice-cream parlours. I lost count after the one hundred and twenty seventh time he told Sam this on the way down …

The thing is, barely ten minutes after they checked into the place, they were stomping out towards me again. Apparently, in all the excitement to pack, the two great goofs forgot their swimmers.

So off we set again, headed toward the town's one and only Goodwill store.

Well, it was a very small Goodwill store, and the pickings were – apparently – slim.

Yep, definitely going to croak it any second … My head gasket's steaming like a freaking fumerole.

Speedoes. They only went and bought Speedoes.

Now they're cavorting around on the beach, playing volleyball in Speedoes. JUST Speedoes.

Acres and acres of tawny, sweaty flesh running around, glistening in the sunshine. Endless legs, all muscly and … and bare feet …

Shoulders. Golden, rock hard shoulders. When was the last time I saw those things? Jeez, you could jack me up on one of those beauties.

And. Speedoes. So fudging tight … if I didn't know better, I'd have thought they'd packed a picnic. And in this case, bananas are definitely on the menu!

My radiator's boiled dry. I'm not long for this world; on my way to special Hell for cars.

And now they're going for a swim, and when they come out, those stupid Speedoes are going to be all wet. And near enough transparen…

Farewell head gasket. It was nice knowing you.