Okay, before I tell this story, I need to give a little bit of background.

I'm sure most of you are aware that I produce artwork of Supernatural characters and take them to the cons for signing by the actors.

Thie pictures are mounted up to the same size - 12" x 10", and when I travel with them, I take offcuts of rigid cardboard cut to 12" x 10" to reinforce the pictures in transit, and to protect them from smudging while I'm carrying them around.

So I was waiting for Jared's autograph, and I was right at the front of the queue - literally the next one to step up to the table.  The handler had already taken my picture and separated it from the backing board ready to sign, when suddenly someone stepped up and stood right in front of me.

Immediately I was thinking, 'hey - what's your game??'  But of course, I'm British, so I would never have said anything - I'd have just stood there and tutted a lot.

And then the penny dropped.

And he was standing so close in front of me, that my nose was practically touching his shoulder blades!

Everyone started giggling, and the handlers surrounded us because he'd come to get Jared's autograph.  Jensen was speaking to Jared in a really bad Italian accent and asking Jared to sign his name for him, while the handlers were playing along saying 'no personalisation - no personalisation!'.

Then Jensen picked up my plain backing board, and glanced at it to see it was blank, then gave it to Jared to sign his name.

Jared was laughing and playing along, and kept twisting everything Jensen said into a dirty joke, until they were both at it.  Jensen's name was somehow interpreted as 'Labia Tunnel' and Jared repeated 'Labia' many times for emphasis

Then one of the handlers said "no, sign his real name" so Jared started asking what Jensen's real name was and Jensen was replying 'Jensen, Jensen' in a really bad Italian accent, and Jared was saying "what? what?".

Eventually, Jared signed the board and wrote Jensen's name as 'GINSIN', then threw the board at Jensen as he walked away.  After the handler had picked my board up and given it back to me - Jared was grinning broadly and apologised to us all for keeping us waiting - like we were ever going to mind!

And then of course he signed my picture, and really liked it ... but I got another free Jared autograph, and money couldn't buy that one! :D 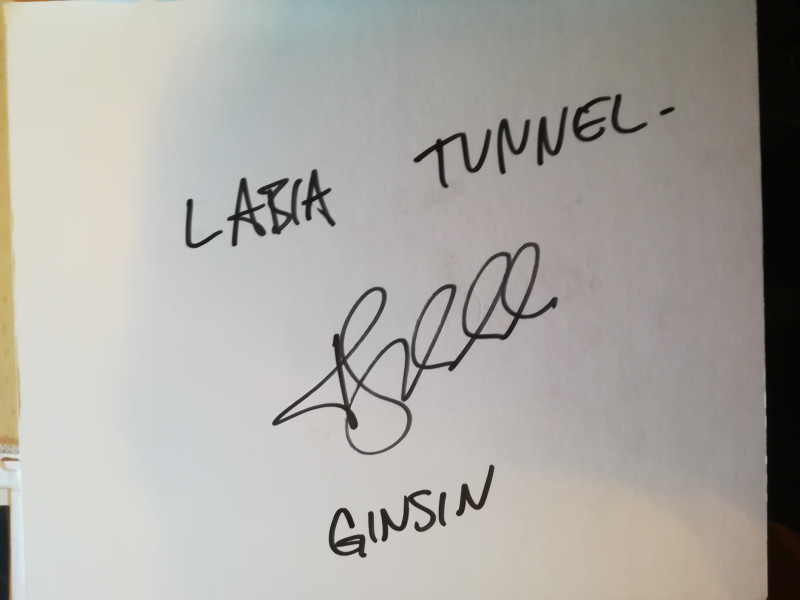