A Weekend in Paris

I've just got back from a fun weekend in Paris at a Spartacus convention.  It was a lovely weekend, having the opportunity to meet people from a different fandom; in many ways it was all very familiar, but it was also strangely different.  Almost like watching myself interacting with long-time Supernatural fandom friends from the outside, as I watched all these Spartacus fans who had laughed and celebrated together over five years worth of conventions.

Attending the convention was a bit of a last-minute decision, (if about three months ago could be considered last-minute).

My friend, and JIB Roommate, Wendy, had first asked me about the con back in the early Summer, and I'd had to let her down because I'd scheduled myself to do the Pretty Muddy fun run for Cancer Research that same weekend, so I had to decline.  Then the shoulder thing happened, and my fracture clinic doctor told me that Pretty Muddy was a no-no.
I'd already got some people sponsoring me, so I announced on Facebook that I was no longer going to be able to do it, and within an hour, Wendy had messaged me.  'So you're free for the Spartacus convention now?'


So my adventure began after two buses and a flight from Heathrow at Paris Charles de Gaulle airport.  I'd never flown to France before, and it only took 45 minutes - I barely had time to sit down and do my seatbelt up before it was time to get off again.

After wandering through Charles de Gaulle for seemingly ages, I felt like I'd walked halfway to Belgium before I finally found the shuttle train to the hotel Ibis where we were staying. Is Charles de Gaulle the biggest airport on the planet?  It certainly felt like it!

It was great to see Wendy again, and we had plenty of time to register for the con, and then settle down to catch up over dinner.

On Saturday, we joined the convention, and noticed that it was a fairly small, cosy con, with only about 400 attendees.  Being used to conventions with upwards of 1,000 attendees, it was refreshing to know that there won't going to be any crazy queues, and that our time witth the guests wouldn't be so rushed.

I had a fairly quiet day; I had only two photo ops, one with Liam McIntyre (Spartacus), and the other with Craig Parker (Glaber), and they were LOTS of fun!

Liam was a great guy who took time to have a short conversation with every single person before asking what they wanted to do fo their photo.  I said I wanted to look like I was doing something naughty behind him - and this was the result! My next photo was with Craig Parker who plays a chracter called Glaber, the Roman Legate who originally double-crosses and enslaves Spartacus, he's a totally nasty piece of work, unlike Craig who is a real sweetheart.  I said that I'd really love to punch Glaber, and Craig said, 'oh yes, wouldn't we all - let's do this!' There were a few great panels throughout the day, and all in all, it was a nice relaxing first day.

On Sunday, I had three more photo ops, the first was with Stephen Dunlevy who played a character called 'The Egyptian', a mute assassin in Glaber's employ.  I'm glad he ws a lot more gentle with me than he was with his victims in the show! Afterwards, I met up with Daniel Feuerriegel who played a Gladiator called Agron, a close friend of Spartacus.  We decided to take a fun selfie! 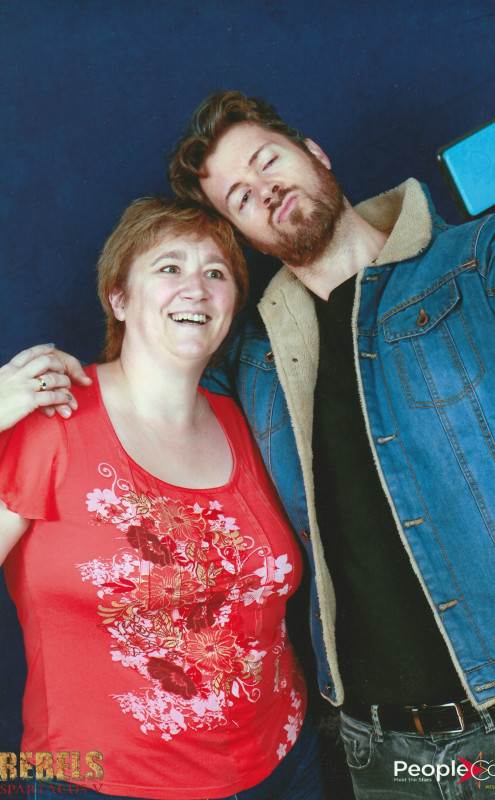 And finally, I met up with Christian Antidormi, who played Tiberius Crassus, a bratty son of a Roman Commander.  I'm glad to say he's totally unbratty and we had a nice little dance! I finished off the day at the autograph session, having the opportunity to chat with the guests and getting my artwork signed, and I was delighted that they were well-received and appreciated! Liam made a point of getting up and hugging every single person in his autograph queue. Craig loved his picture, and complimented me on how I'd made Glaber look like a 'grumpy old fart'.  I commented that he kind of was a grumpy old fart, so it was good to hear I'd got it right.  Then I mentioned that I loved him as Haldir in Lord of the Rings, and added that Haldir was a bit of a grumpy old fart too.  Craig laughed, and replied, 'yeah, that's all I get to play these days, they must be trying to tell me something!'  XD The convention ended up on a very emotional note with a tribute to Andy Whitfield, the actor who played Spartacus in the show's first season, who tragically died of cancer at the age of 39.  The whole con ended with footage of Andy, in character, standing in the Arena, arms outstretched, shouting 'I am Spartacus'.

In response, we all stood up and shouted 'I am Spartacus'.

By now, the cold that I had felt myself coming down throughout the day, was starting to make its presence felt, so Wendy and I headed off to the restaurant for another bite to eat, then it was time to pack, and take my snot-riddled body to bed.

The following morning I had a 4.30 am start for a 7.00 am flight.  Once again, after dragging my diseased carcass out of the hotel, traipsing the four thousand miles (or so it felt) to my gate in the airport, sitting and waiting for the coffee shop to open, waiting an hour for a bus at Heathrow, and finally falling through my front door six hours after I'd first woken up, I felt like I'd done a few battles in the Arena with a Gladiator or two myself.

But, it was all worth it for a fun weekend, meeting some truly gracious and lovely actors, and spending time with a great friend!