Poe-esque ... is that actually a word?

A few of my readers thus far have said this puts them in mind of Poe which, if you're aiming for dark and gothic, is probably as good as you can hope for!

The boys don't usually have an audience for their salt and burns. But tonight someone's watching. Outsider POV.

Disclaimer: don't own them - just not fair. 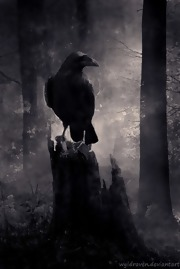 Moonlight shimmers over his iridescent back like water over onyx;

As he's done his entire life.

In the twisted carcass of an ancient yew, he sits;

and watches over the cemetary.

But tonight is different.

They dropped a spark into the ground;

Smiled as flames reared up to meet them.

And then they left.

The crow quietly preens stinking ash out of his plumage;