The Man in the Mirror - Chapter 2 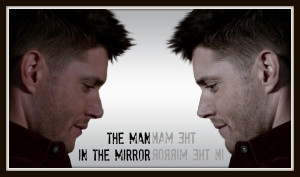 Sam stared blearily into his cellphone, gaping stupidly through the darkness of his bedroom. After what seemed like an age, the first vaguely lucid thought that strayed through his addled mind was; 'why do these things always happen to me?'

Ending what was possibly one of the weirdest phone calls he'd ever been involved in on a mumbled promise to head right away to the police station to collect his errant brother, he stood up, stretching, farting and then stumbling over the comforter he had kicked off the bed, almost faceplanting into his wardrobe.

He stormed through the bunker's dark corridors carelessly throwing on some random clothes as he went, until he reached Dean's room and, without a thought for privacy or discretion, flung the door open.

Although the Night Officer had certainly described someone like Dean; 'about six feet tall, stocky, short cropped brown hair', and that the alleged 'Dean' had given Sam's current alias as his next of kin, Sam still had to see for himself that this wasn't just a huge misunderstanding. He inwardly kicked himself for thinking it; of course it wasn't - he could never be that lucky.

Cautiously peering through the open door into Dean's room, he found it empty and his heart sank as he regarded he rumpled, kicked back comforter, sprawled messily across the empty bed.

Quickly grabbing a pair of sweatpants and a T shirt which were slung the over the back of Dean's chair, he headed out into the unwelcoming black chill of the night.

It took less than half an hour to get to the police station; after all there weren't any other sad assholes on the road at this time of night. On leaving, Sam made a point to call Dean's cell, and had to settle for telling Dean's voicemail that it's owner was a goddamn moron and that he was coming to get him, and kick his stupid, reckless ass all the way back to the bunker.

After a brief chat, Sam was led by a weary Night Officer to the cells. "I gotta say," the man drawled; "he's been a model prisoner; came quietly, no puking, didn't fight or try to talk his way out of it - pretty refreshing compared to the ones we're usually pickin' up at 2 o'clock in the morning."

"… we got no idea why he was wet, an' when we asked him where his clothes were," The Officer continued, glancing idly up and down Sam's long frame and seemingly choosing to ignore his inside-out sweatpants and back-to-front T-shirt. "All he could say was that he didn't have any." He paused for a moment, as if lost in thought; "then when we asked him about the stuff he stole, he jus' said he was hungry, like that was a perfectly valid excuse for raiding a diner in full view of the night staff, three truckers and a hobo."

He shrugged; "to be honest, he seems a bit out of it."

Sam nodded patiently; "I'm sorry officer," his mind whirled as he fished for suitable explanations that didn't make him sound like a complete weirdo or the worst brother in the world; "we've been trying to, uh, reduce his medication; I promise this won't happen again."

That heartfelt apology together with appropriate recompense for the items that Dean stole were enough to get all charges dropped and a stray brother released with a friendly warning to 'be careful an' stay outta trouble'.

Waiting while the cell was unlocked, Sam's anger instantly dissipated when his eyes fell on his brother sitting huddled into a corner at the back of the cell, wrapped in a big grey blanket with his still-damp hair sticking out at every point of the compass and a few more besides. He looked suddenly small and lost and even vaguely scared.

Sam calmly placed the clothes on the bench beside Dean, "c'mon dude, put these on." He noticed Dean nod obediently as he turned his back to give him privacy to dress. "When we get back, you're gonna tell me exactly what happened here, Dean;" he warned as he heard the blanket drop to the ground behind him. He didn't hear Dean's hesitant nod of response.

During an uncomfortably silent drive back from the Police Station, Sam sat stewing behind the wheel, his head a whirl of thoughts. Beside him Dean sat blank faced, staring meekly through the windscreen, his hands clasped tightly together in his lap.

A quiet Dean was never a good sign. Sam knew that his brother only had two volume settings; loud or smartass. Even when he was asleep, he was never quiet. This silent, remorseful, even timid, figure sitting beside him in the Impala was either scheming, sulking, scared or sick or, worse still, a combination of any or all of them. The fact that he never asked to drive, not even once, only added to Sam's growing list of concerns.

Thankfully, Sam didn't have too much time to mull over his worries as the Impala pulled smoothly to a halt beside the bunker after only a few minutes and he stiffly climbed out, shuddering as his weary body was once again exposed to the chill night air.

He paused to make sure Dean had managed to get out of the car, and strode down the ramp toward the Winchesters' home, turning to see Dean trailing barefoot behind him. Dean's head was bowed; his face, painted ivory white by the moonlight, still set in that blank expression that was unnerving Sam so much.

He stumbled to a halt beside Sam and stood, waiting patiently as Sam fumbled in his pocket for the key.

As he heard the lock mechanism click open, Sam turned the door handle and gestured behind him, beckoning Dean past him into the bunker's cavernous interior; "c'mon dude," encouraged, schooling his face into a sympathetic smile; "it's cold out here."

As the door swung open, they both stepped forward.

Nothing, absolutely nothing, in Sam's entire life's experience of weird, bizarre or just plain cuckoo, could have prepared him for the sight that met him when the door opened.