My trip to Rome began approximately 12 hours after I fell through the door to my home in an exhausted heap the night before.
The trip didn't get off to the greatest start when my bus to Woking station got caught in stinky traffic, and a trip which should have taken 30 minutes took over an hour.

I was convinced that I was going to miss my coach link to Heathrow, but lo and behold, I finally got to the coach stop, and my connection pulled up right alongside me.  It had been caught in the same traffic I had been!

Two hours later, I'd got to Heathrow, cleared security and was sitting in Starbucks, savouring a latte and writing a section of my

After the plane touched down in Rome, together with my trusty little wheely suitcase which had survived it's travails in Blackpool, I marched through the airport and across six travellators until I reached the Hilton.

I took one look at the hotel, and smiled - it really did feel like home.

The first face I saw was

sinfulslasher's who was waiting for me in the lobby.  We checked into our room, unpacked, then headed down to register where we met up with

Then, safely in possession of our precious passes, we headed the bar to toast Sinfulslasher losing her JIB virginity with a couple of Mojitos, and chatter the evening away!

Wednesday and Thursday were JIBLand, and I wasn't really planning to take a very active part. I don't watch any of the shows represented at JIBLand, and so I didn't really know many of the actors.  (I walked right past Tom Ellis without even realising it!!)
Tuesday, therefore, was spent in Rome, doing a bit of sightseeing with Sinfulslasher, something I haven't done for the last couple of years.

It was about a zillion degrees in the city that day, and by the time we stopped off for a bite to eat, I was seriously wilting, and smothering myself in sunscreen lest I look like a boiled lobster in my JIB photo ops.

I had mentioned previously that going from Blackpool to Rome in the space of 24 hours, was like eating Monster Munch and washing it down with Dom Perignon.  Rome was as stunning and awe-inspiring as I had always remembered it to be, and to share the experience with someone who hadn't seen it before made it even more special.

After another chiling out evening, Wednesday dawned and Sunfulslasher was off to the Vatican.  I had been to the Vatican before and had no desire to see it again, so I spent the day dipping in and out of JIBland panels, and catching up with JIB friends who were, by now, starting to arrive.

Tom Ellis and Sasha Roiz seemed like great fun, I may give Lucifer a try in case Tom is at JIBland again next year.  Reeve Carney was sweet, and clearly a very talented musician, although he seemed a little bit overwhelmed by the whole experience.

We clapped and cheered for the guests when JIBland ended, but now we could look forward to Jus in Bello, the main event.

By now, Sinfulslasher had transferred into her own room, and my original room-mate (Wendy from Belgium) had arrived.

JIB was scheduled to start at 3pm on Friday, which was handy because at 7am, we got a text message from Amberdreams sayng that she had got hold of the Finale, and we were invited to join them for a watch party at 7.30 am.  What?  None of us could wait any longer!

After a quick trip down to the restaurant to grab a breakfast doggy bag, we headed up to Amber's room, where five of us gathered together to watch.

Oh Crap!!!  What a Finale ...
I shall say no more for fear of spoilers.  Although, there's probably not much I can say that hasn't been splurged all over the internet already!

There was a general feeling of stunned shock over the Hilton by the time everything kicked off at 3pm.  Everyone had a theory and an opinion, and you just knew the questions would be flying around in the panels.

We watched a few of the first panels on Friday afternoon, and I even managed to grab a couple of autographs.  When everything packed up for Friday evening, the excitement for the main event starting tomorrow was palpable.

Sure enough, Saturday morning, the hall was packed, and when the sound system belted out 'The Boys are Back in Town' to welcome J2 and M on the stage, there wasn't an undamaged eardrum in the room.

Jared plucking Jensen's leg hairs through the holes in his jeans
Gil singing
The hilarious J2M rental house story
Jensen being a naughty scamp during the J/M panel - showing his pants to Misha, seriously??  RAAWWWR!
Jared accidentally blurting out a whopping spoiler for Season 13
Rob talking about his unfortunate experiences at Heathrow and generally being adorable
Jensen talking about YANA and his emotional reaction
Matt being very honest and open and expressing his gratitude to the fandom
My roomie Wendy, getting on stage to play Rock, Paper Scissors with Jensen
The boys doing accents - badly
Poor hungover Jared getting absolutely zero sympathy from Jensen and Misha
Adam and David being sweethearts and loving every second of the con experience
David giving us the earworm of the year, the 'Making Bacon' jingle
David and Adam both remembering me from Asylum and greeting me like an old friend

I could go on ... but I won't, because you guys have a life outside of this post.

My autographs were a special experience this weekend:

Misha loved his Steve picture, and spotted straight away that it was Steve, not Castiel 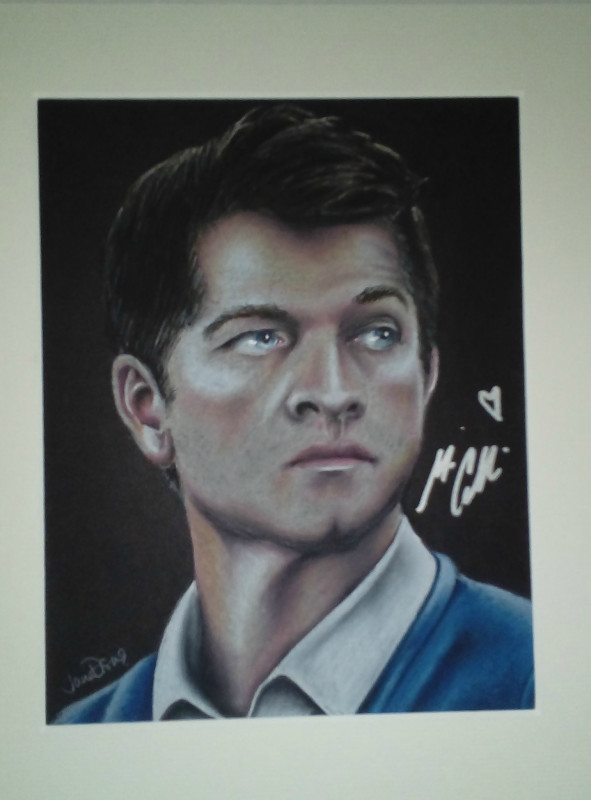 Jensen grinned like a loon, and pointed to his nose.  I told him that I was inspred to draw his beer moustache after watching Monster Moie and he grinned even wider, saying 'it looks like I''ve been snorting cocaine'.  I replied, "well you never know what Dean gets up to when no-one's looking!"  You can hardly see his signature because he signed across the chest of the picture, and the powder from the pastel clogged all his pen up!!!!

Jared loved the picture, and wanted to chat about it.  He asked me how long it took, and that he was so flattered that I had taken the time and effort to draw it.  I told him that doing this kind of stuff was my happy place, it's no hardship at all.  He stared at it for the longest time before he decided where to sign it and said.  "I'm just stunned, I can't draw at all."  As he gave the picture back, I said "that's ok, I can't act."  he laughed, and as I walked away, he called after me, "Neither can I."  I turned back and said, "YES YOU CAN!!"

When I went for my photo op later, as I stood next to him, he said again; "really, I just want to say again, that's such great art."
I thank him and told him it means so much to know that he likes it.
Then he squeezed the living daylights out of me!

(sorry for the brag, but I was pretty much walking on air for the rest of the day!) 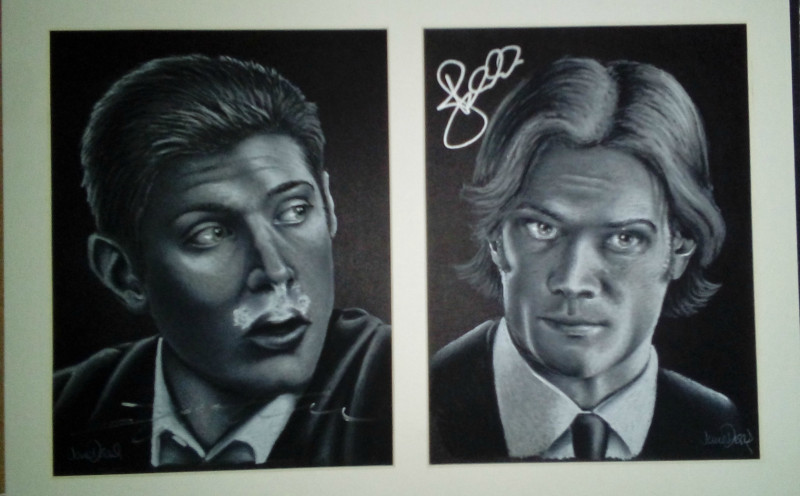 Of course, I also had photo ops to take, and this is the result:

A lovely smiley Jensen and a poor knackered, hungover Jared! 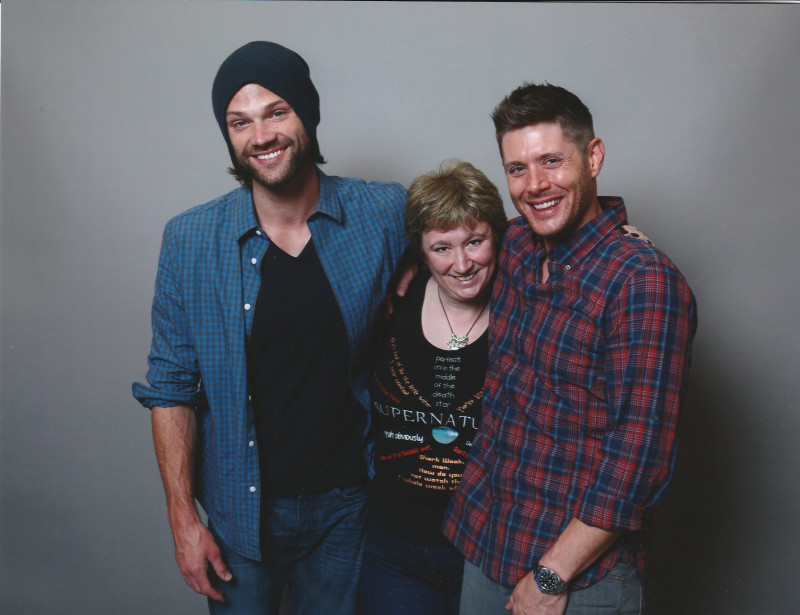 I have absolutely NO idea what Misha is looking at here! 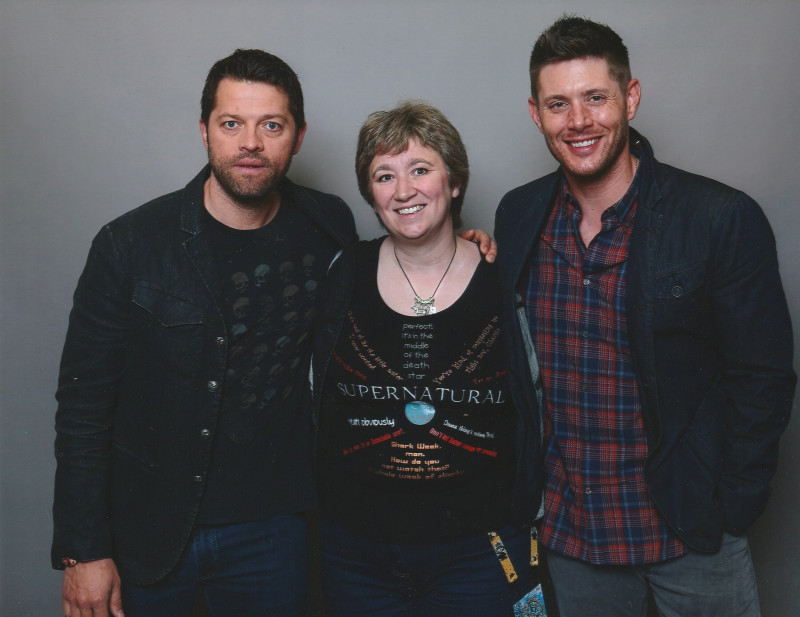 A tip:  Don't ever approach Jared and ask for 'a good old-fashioned squeeze'
YE GODS ... can that man squeeze!
This is the face of a woman whose life is slipping away.  Breathing?  bah, it's over-rated!  I mean, if I was about to peg out through oxygen starvation, I couldn't imagine a nicer place to do it! 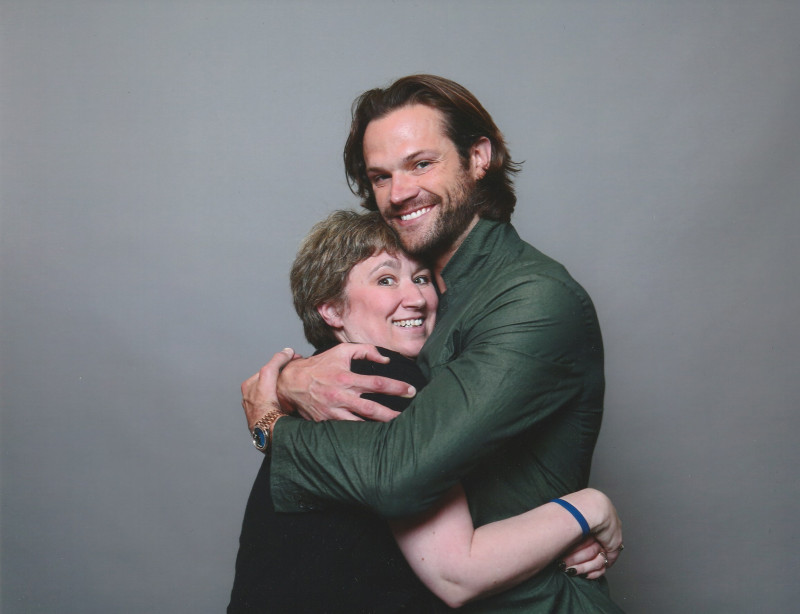 I seem to do a lot of dancing with David! 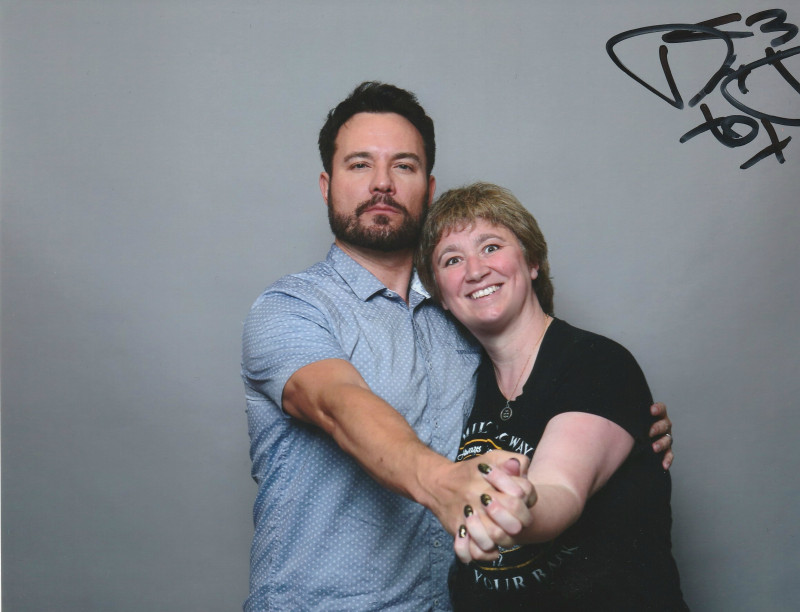 My trio.  I can't put into words how much I adore this pic.  It's even a fairly respectable one of me! 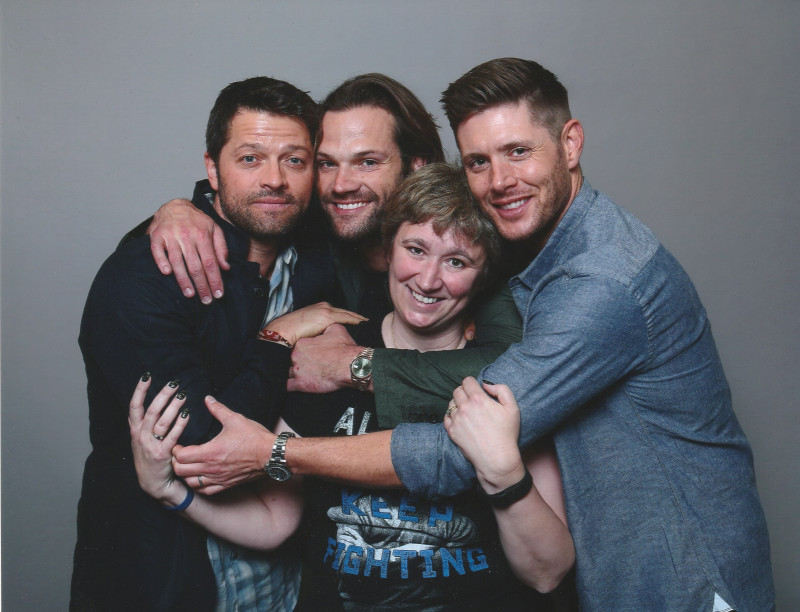 The thing I love about David and Adam is that they're such sober, sophisticated fellows ... 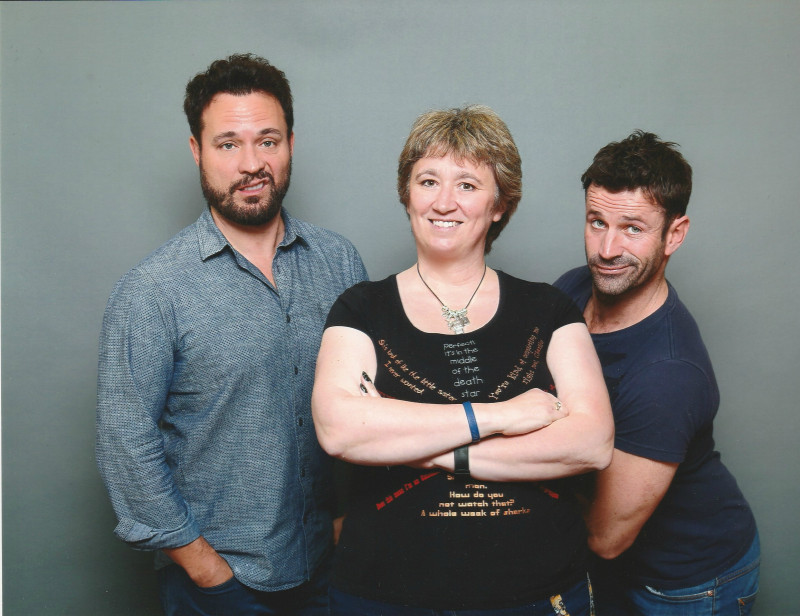 Did I mention that I want to eat Adam's beautiful Irish brogue? 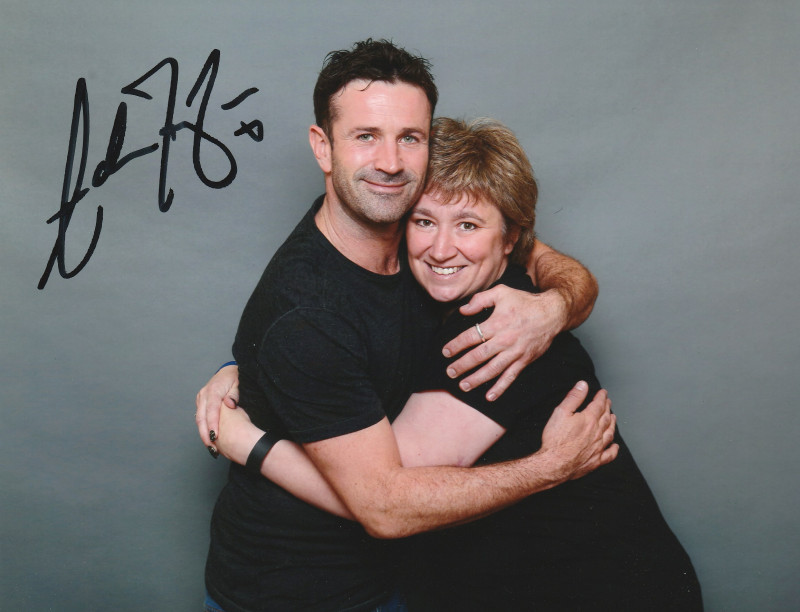 The only glitch of the whole con was that due to the fact that things were running late in the hall, and like a ninny, while I was watching Jensen's panel, I assumed they'd be running late everywhere else, (they weren't), I missed my Misha photo op.

But that's a teeny weeny blip in what was an epically wonderful weekend.

Every evening provided wonderful musical interludes with performances from Rob, Jason and Reeve Carney, there was also a fabulous Karaoke evening with all the gang.  The in-between time afforded a great opportunity to catch up with old friends.  There was much chatting and laughing, especially one evening when Herminekurotowa, Stellamira, Sinfulslasher and I were discussing new slash pairings, most notably Sam/Mick (sick) and Dean/Mick (dick).

My other noteworthy experience was in Jensen's meet and greet.  It was, as always, fascinating, but over in a flash.  I didn't get a chance to ask Jensen a question, but when his lady handler told him there were three minutes to go, and he made some offhand comment about always being told what to do, I told him he needs to get used to be ordered around by women - he's got a houseful of them now.  he laughed and agreed.  He told us he sometimes looks at his son and says, 'buddy, we're so outnumbered!'.

Before any of us knew where we were, the closing ceremony was upon us, Carry On My Wayward Son was being belted out, and as we all filed out of the hall into the hotel lobby, there was much red-eyed face-wpiping going on.

Another JIB was over, but at least we had the confirmation for 2018 to soften the blow!

We still had the Rob, Jason and friends (formerly Jailbreak) concert to look forward to on Monday evening, and after a soul destroying two hour wait in blistering sun to actually get into the place, the concert didn't disappoint.  It was a fun and stirring end to another awesome JIB weekend.  A last gathering of old friends and new before we all went our separate ways for abother year.

I know I've posted this picture before, but I love it and for me it sums up everything JIB is about. Friends without boundaries and borders.  Just a common love of our show and of each other. 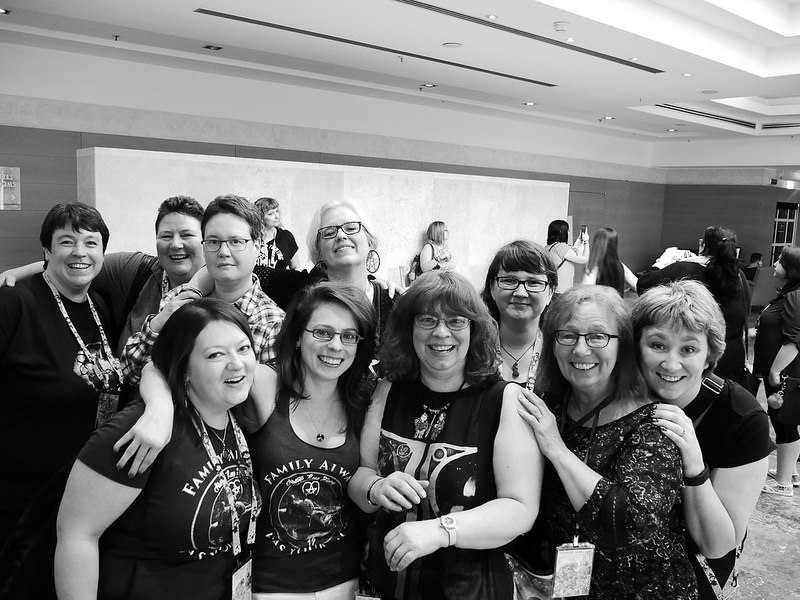 Here's a couple of other little fun snaps. 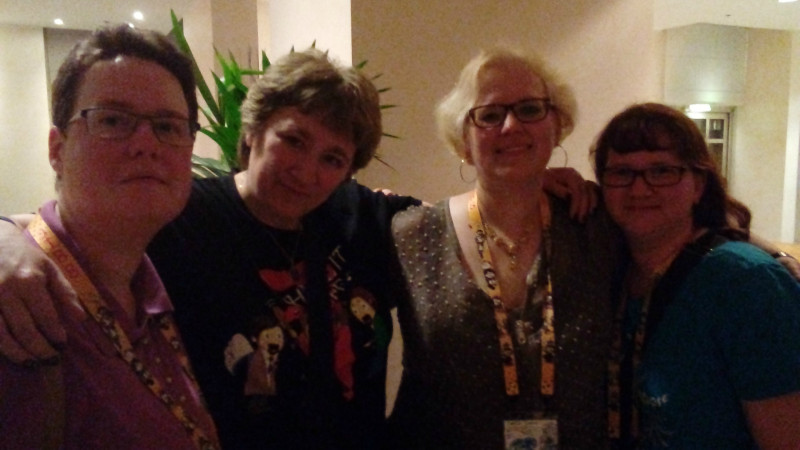 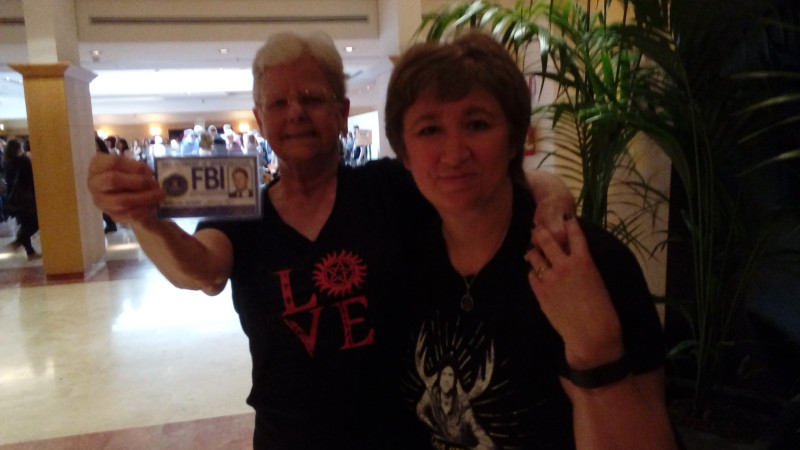 and finally, some of my okay, but not brilliant photos ... 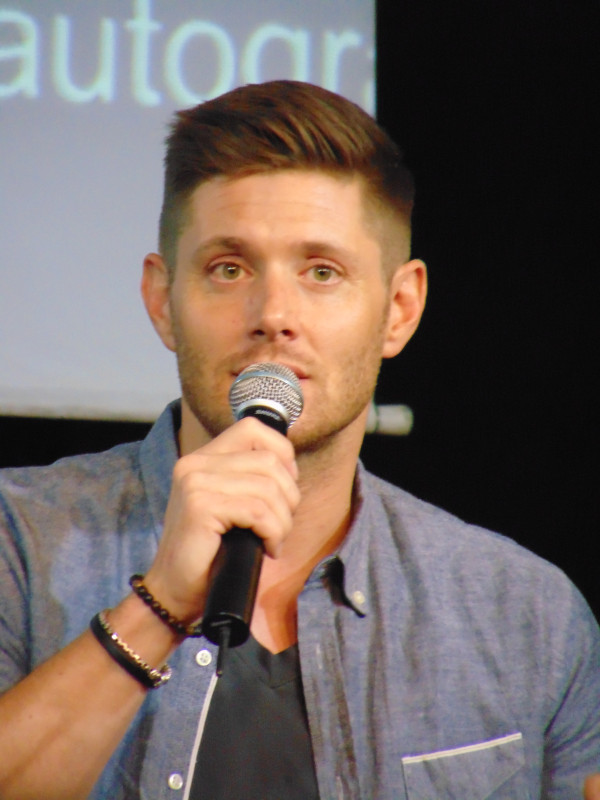 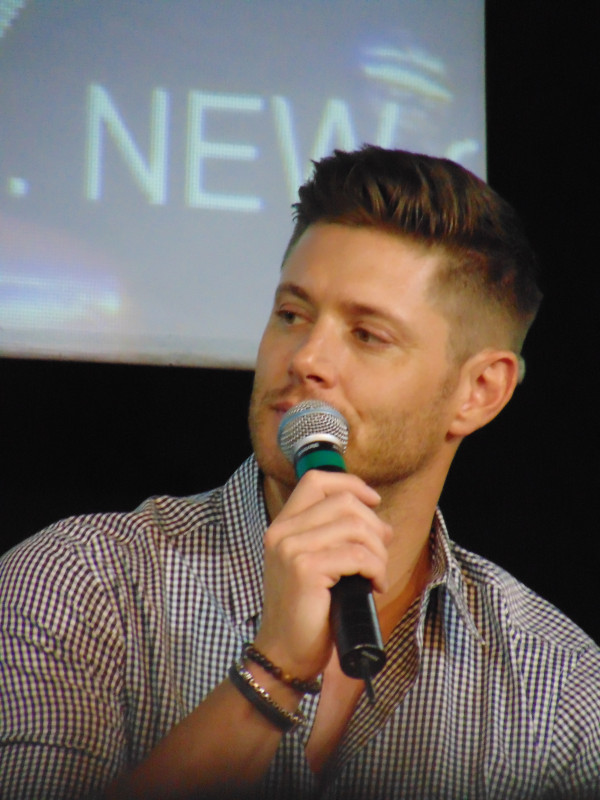 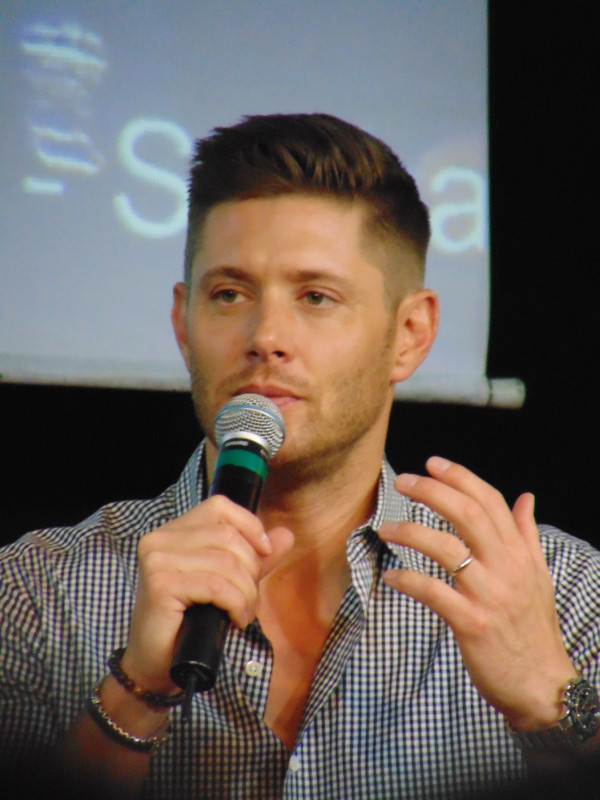 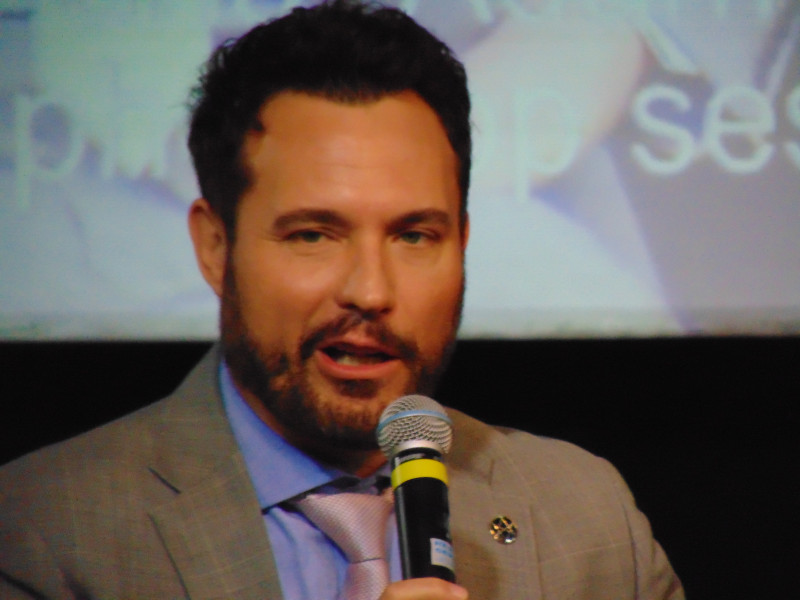 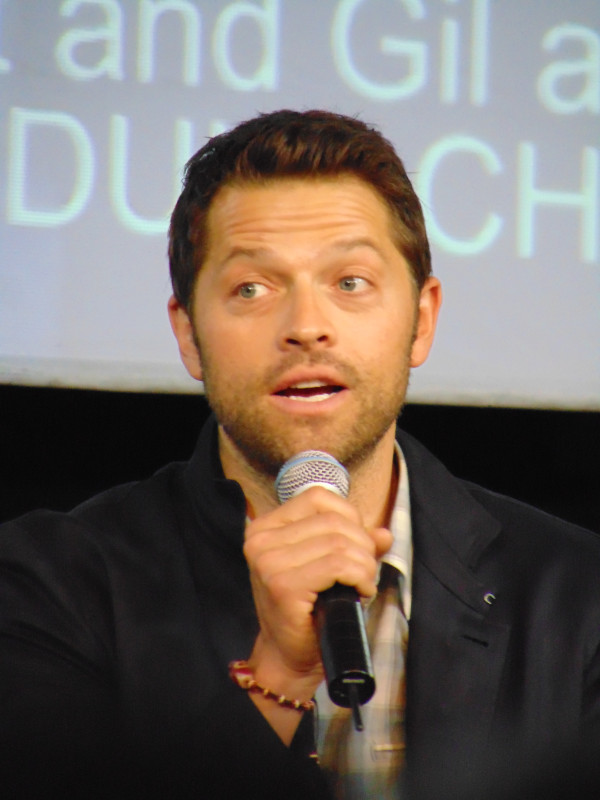 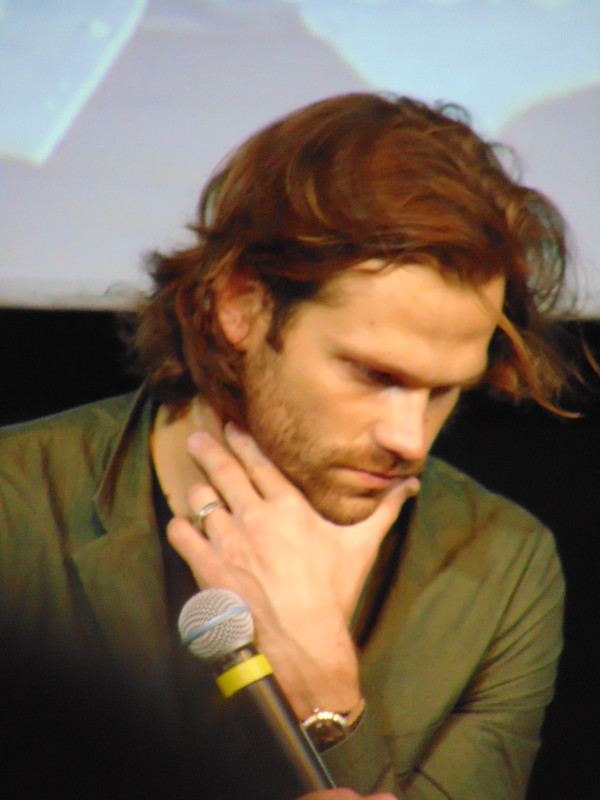 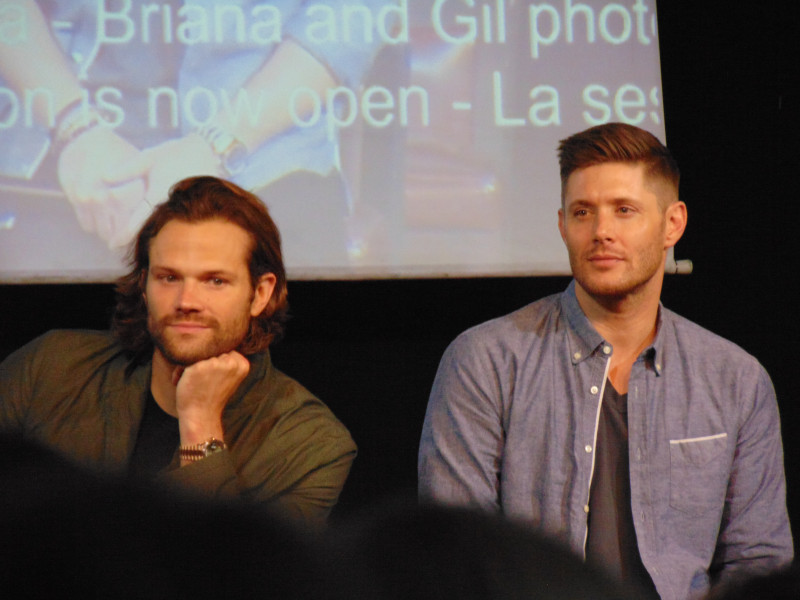