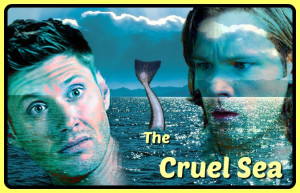 Dean shot Sam a look of blind, ice-cold panic as Florence gave another juddering lurch, keeling drunkenly over to her starboard side and sending both brothers skating across the listing deck into the rails.

"She's a boat, Dean," replied Sam bluntly, fear sharpening his words; "she can."

They both clung to the rails, panting in wordless horror as they watched the sea creeping over her submerged bow toward them.

Down and down, she listed; surrendering meekly to the pull of the ocean as her two helpless occupants fought gravity, scrambling as far up to the grotesquely skewed stern as they could.

Finally, it was Sam who broke the silence.

"Put this on and jump," he barked, thrusting the lifejacket into Dean's chest.

Dean had barely had time to squirm into his lifejacket before Sam's long arm clotheslined him over the rails backwards, and both brothers plunged into the simmering ocean's chilling embrace.

They writhed and tumbled beneath the churning foam, deafened and disorientated by the water roaring and raging around them before their lifejackets pushed them upwards and both their heads broke the surface simultaneously, bobbing like corks on the ocean's restless surface.

Coughing and spluttering, they blinked stinging seawater from their eyes and watched mesmerised as Florence slowly and inelegantly turned turtle, her bulbous, weathered hull pointing briefly at the sky and bobbing gently for a long, peaceful moment before, with a deafening whoosh, and rumble of foam, she slipped helplessly below the water's surface to the inky depths; finally bringing a long and undistinguished life to an appropriately undistinguished end.

The brothers clawed wildly at each other, desperate to cling to something solid as they fought frantically against the pull of the churning ocean, trying to tug them down to their doom along with their sad little boat.

She watched the ungainly dark mass of the boat's hull as it plunged past her, disgorging it's contents out into the surrounding waters.

Picking through a drifting detritus of clothes, books, bottles and other assorted effects, she wrinkled her nose in disgust at the coarse material of the clothes which floated and wheeled slowly and dreamily through the water around her.

The sour odour of beer from a freshly drained bottle assaulted her nose and made her choke.

These men of the dry world really were vile creatures.

Casting aside her revulsion, she picked her way through everything she could find drifting silently down through the sun-dappled depths and gave a squeal of satisfaction as she found what she was looking for spilling out of a grubby canvas duffel bag.

Her comb, her flute, her circlet and her mirror, exquisitely and skilfully crafted so many years ago by her people, had finally come home.

She joyfully gathered them up and headed away, cutting through the water silently and swiftly like a silver blade.

"Peachy," croaked Dean, spitting out a mouthful of seawater as he scraped his soaked hair back off of his forehead; "what in hell happened?"

Sam's shrug was lost beneath the blocky outline of his lifejacket. "The boat sank," he replied weakly.

Dean's glare almost boiled the water around them; "the boat sank?" he snapped; "the freakin' boat … dude, if we get out of this alive, I'm gonna freakin' kill you."

Sam almost mustered a smile; "not much incentive to get rescued then."

Dean lifted his chin, trying to keep his face out of the water; and gave an involuntary shiver, whether it was borne of cold or fear, he didn't know.

"Hope that friggin' fishing boat turns up soon," he grunted.

Sam's stomach plunged into his guts. "Trouble is," he began hesitantly, "when I radioed them, I told them we were on a boat."

"Well, they're gonna come looking for a boat," Sam continued, his voice rising in volume and pitch as fear as well as the chilling weight of the water around them tightened his chest; "if they come and see there's no boat anywhere around, they probably won't even see us."

A strained silence fell between the two men.

"I'm sorry", sighed Sam eventually; "this was a crap idea wasn't it."

"Not one of our best," replied Dean, trying for his brother's sake to effect a light hearted, 'laugh-in-the-face-of-danger' smirk.

Dean's face dropped into a scowl; okay, that went well!

They gripped each other by the arms and clung together closely, watching the horizon with wide, salt-reddened eyes, willing a boat to appear on the terrifyingly empty expanse, and bring a flicker of hope to them.

Neither of the Winchesters had any idea how long they had been adrift; two infinitesimally small, helpless specks marooned in the open vastness of the Atlantic ocean. Both were exhausted, thirsty, nauseous, and more scared than they had ever been in their lives.

They became numb to the heavy chill of the ocean lapping around them, the barely perceptible weight of the current pushing them along to heaven knows where. They would be well away, by now, from the spot that Sam had originally advised their would-be rescuers.

Dean scanned the horizon, unblinking, silent. It was all he could do to focus his mind and stop himself from dwelling on the swift, heavy, creature that had slammed aggressively into their boat earlier. He knew, and he was sure Sam knew, there was only one thing that could have done that. He tried not to dwell on the open grazes on his back, no doubt reeking of blood to the right nostrils; the mysterious sting he'd acquired - did those sorts of things smell of blood or poison or what?

Either way, he had long since added 'Jaws' to the list of movies he really wished he'd never watched.

Sam looked up wearily, his wet hair spraying a shower of droplets into Dean's face, and froze.

On the horizon, a distant hulk, silhouetted against the late afternoon sun. It was a fishing vessel, grey and industrial, boxy and ugly.

And it was the most beautiful sight they had ever seen.

Gathering up their remaining energy, they both waved furiously.

They both shouted, screaming for all they were worth, sucking damp, salt-laden air into their burning throats as they fought to fill their lungs enough to make their voices heard.

"HELP US PLEASE; OVER HERE!" Dean yelled, cringing as his abused voice tore his throat, he felt as if his voice box would burst under the strain; "GODDAMIT, WE'RE OVER HERE …"

Beside him, Sam yelled no less impressively, his long arms waving furiously as he tried frantically to make himself as visible as possible.

The boat lingered for some time, looking for all the world as if it was searching, scanning; then it began a slow turn.

His words trailed off into a despairing, broken wheeze.

The boat slipped slowly back over the horizon, taking with it the brothers' last slim hope of rescue.