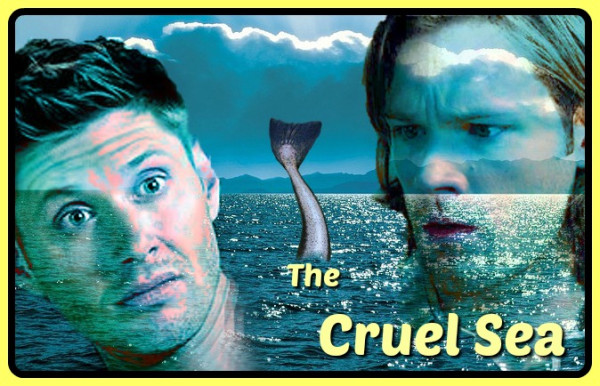 I decided to give this story an airing, as it hasn't seen the light of day for a while.
It's 13 chapters of humour and hurty comfort and I'll post one chapter a night until it's finished.
It's no particular resemblance to canon, set sometime during the show timeline.


Ancient bedsprings creaked and groaned as Sam shifted wearily. Lying flat on his back, arms folded behind his leaden head, he stared through gritty, tired eyes at the moonlit cobwebs that festooned their sparse room's grubby ceiling, and reflected glumly on their last hunt which hadn't exactly been an unqualified success.

The words 'abject humiliation' sprung to his mind. They seemed to sit quite comfortably alongside 'total fiasco' and 'catalogue of dumbass blunders'.

Glancing across the darkened room, his eyes latched onto his sleeping brother. Sam knew that Dean had suffered from the trials of the last few days even worse than he had; two hospital stays within a week was an impressive scorecard even for Dean, and Sam's ears were still stinging from the many furious chewings they had suffered. But how many times can a man say he's sorry?

Ultimately, he knew that whatever heartfelt justifications and apologies he made, Dean's unique brand of logic had already decided the whole debacle was Sam's fault. Although Sam was happy to admit the hunt had been his idea, Dean wasn't entirely blameless in the comedy of errors it had descended into. He knew, however, that Dean wouldn't let a little fact like that get in the way of holding it against Sam for the rest of his life, and most likely beyond.

On their return to the room, Dean, clearly not sharing Sam's guilt-ridden insomnia, had stumbled out of his jeans and almost instantly fallen into an exhausted, grumpy sleep. Currently sprawled squid-like across the bed, he lay flat on his belly under a crumpled merangue of tangled quilt, bare feet hanging limply off the end of the sagging mattress, muffled snores melting into a yellowing pillow which he hugged like a long-lost friend.

Sam's aching body felt like he had been wrung out, like a damp old dishrag that had scrubbed one pot too many.

He swallowed back a lingering queasiness as his stomach lurched miserably, the harsh motion reigniting a burning in his dry, abused throat, and grimaced; his mouth tasted like a goddamn camel's armpit. Okay, he didn't actually have personal experience of what a camel's armpit tasted like, nor did he have any wish to gain such experience, but under the circumstances, he felt it was a suitably descriptive metaphor. Or was it a simile? Or was … oh, damn it to hell, he didn't care what it was, he just wanted to sleep before his eyes bled out, then hit the road in the morning and leave this godforsaken patch of nowhere a long way behind them.

Dean shifted in his sleep unconsciously ditching the quilt as he lavishly scratched his ass, then let loose an impressively loud snort before mushing his violently sunburned face back into the pillow, and snuffling a long, wet groan into it.

Giving into the lingering ache of a dehydrated body, Sam blinked back stinging exhaustion as his mind dredged up recent events over and over again. He wanted to blush furiously at the thought but his face was so heavily sunburnt, it wouldn't have been worth the effort.

Even so, he wouldn't have minded if they'd actually achieved something through all their trials and tribulations, but no; the whole hunt had been a complete bust.

They had discovered nothing - apart from a lot of new swear-words when Bobby came to collect them from the hospital and decant them back at the motel.

And after everything, all they had to show for their efforts was a depressing catalogue of self-inflicted incapacity including cuts, bruises, sunburn, headaches, congested lungs, streaming noses, dehydration, loose bowels and a mysterious sting which wouldn't stop itching; quite how Dean had managed to get himself stung there and by what, Sam didn't even want to consider.

His train of thought was abruptly derailed as Dean let loose a spectacular sneeze deep into his pillow and his whole bed frame rattled. His unconscious limbs continued their squid-like wanderings across the mattress as he rolled inelegantly over onto his side, letting out a rattly grunt and pausing to wipe his nose on his wrist as he rummaged inside his boxers to enthusiastically scratch his butt on the way over.

It was a long time coming, but finally, Sam could feel sleep drifting over him, he sighed with relief as he felt himself begin to relax. Thoughts of their recent ordeal began to fade along with his consciousness.

Burrowing his shoulders deep into his pillow, he allowed himself sink into delicious oblivion. As his mind faded to black, one last conscious thought played across it.

He was never going anywhere near the goddamn ocean ever again.