With all the excitement of Asylum 16 over the last few days, I haven't got around to celebrating the fact that one of my drabbles won a Supernatural Monthly Fan Fiction Award in April! 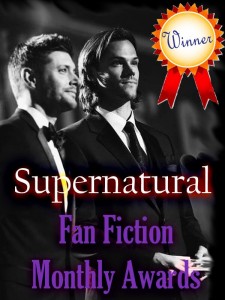 So, here's the winning drabble ... just for fun!

Welcome to Hell. Only demons and dogs allowed.


Crowley stood before the assembled masses, and glared at them, feeling a wave of angry contempt swelling within him.

"Right, you brainless nonentities, pin your bloody ears back and listen. The only pets allowed in Hell are Hellhounds. GOT IT?"

He was rewarded with some hesitant nods.

Rolling his eyes dismissively, he slumped down into his intricately carved throne, which promptly collapsed beneath him.

"AND IF I FIND THE PRAT WHO BROUGHT TERMITES DOWN HERE TO FEED THEIR HELLGECKO, I'M GOING TO FRY THEM ON THEIR OWN BLOODY HEAT LAMP!"