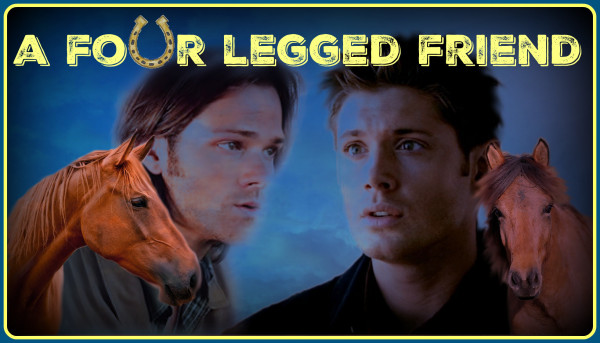 I thought I'd give another of my multi-chapter stories a bit of an airing; this one hasn't seen the light of day for ages! I'll post one chapter each evening over the next few nights .

A FOUR LEGGED FRIEND
Rating: T for some naughty words
Genre: Hurt/Comfort/Angst/Humour/Case!fic
Characters: Sam, Dean, Bobby
Spoilers/Warnings: No spoilers, no particular resemblance to canon
Word count: 21,000 over 11 chapters
Disclaimer: I don't own them

A Chupacabra hunt deep in the mountains proves to be a challenging time for the boys, not least of all getting there in the first place ...

"You've got to be friggin' joking."

Dean stared at their mode of transport with poorly disguised horror; "Sam; tell me you're not serious?"

Sam shrugged. "Dean, we're never gonna get through that mountain track in all that dense forest in the Impala."

Dean's mouth worked but nothing apart from incoherent squeaks and spit came out.

The two horses standing either side of Sam stared back at Dean from under long coarse lashes with equal disdain. The tall slender chestnut snorted loudly, spraying Dean's face with a warm mist of grass scented spit.

Sam shook his head, "we can't walk all the way there with all our stuff," he pointed to the massively bulging saddlebags strapped across the haunches of both horses.

Dean stared at the bags, shaking his head to clear his thoughts; "what the hell is all this friggin' crap? "

Sam looked around shiftily, "well, there's our duffels, all the water and provisions, our weapons, our tent, our books and laptops, our …"

Dean cut him off with a raised hand; "tent?" His glare darkened as he folded his arms across his chest. "Do you mind explaining why we need a tent?"

Sam looked down and drew lazy circles in the gravel with his foot, "um, because it's a good two days trek along the mountain pass to the region central to most of the Chupacabra kills, and there are no motels or any sorts of buildings between here and there."

Dean's brows knotted into a constipated frown; "an' when were you planning to share this little pearl of wisdom with me?"

Sam smiled weakly; "it must have just, uh, slipped my mind."

Dean rubbed a hand across his clammy forehead, "this freakin' day's just getting worse… do you know how much I hate camping?" he spat, "sleeping out with the bugs, pine needles in your butt cheeks, peeing in friggin' bushes …" he sighed; "anything else you wanna tell me about this damned field trip? You wanna hunt raccoons and eat their spleens or something?"

Sam rolled his eyes, shaking his head, "nah you're okay; I brought burgers, we can make a fire and cook them instead; not as chewy as raccoon spleens."

Dean knew this was a lost cause and wilted. He looked at the barrel chested dun horse that stood in front of him, knock-kneed and splay-footed, it eyed him suspiciously from under a profuse black forelock.

Sam handed over the reins and gestured towards the saddle; "we'd better get going, dude."

Dean took the reins with a sigh.

Pulling their horses round the brothers swung up into the saddle. Sam's long leg swung freely over his mount's muscular haunches, and within moments he was perched comfortably in the saddle looking down on the spectacle beside him. Dean appeared to have lost his momentum halfway over. He dangled, one foot in the stirrup, the other knee wedged between the cantle of the saddle and the saddlebags strapped over the ample dun hindquarters beneath him. He grunted and cursed as he tried to heave himself all the way over.

The unbalanced horse swung round and barrelled backwards into Sam's tall chestnut, confronting him with the unlovely close-up of his spreadeagled brother's denim-clad ass clinging crookedly to a broad dun rear end like a monkey up a stick.

"Frig, frig, friggin' keep friggin' still you freakin' assbutt sonofabitch fleabag …" The muttered oaths became more and more colourful as Dean managed to haul himself into a vaguely upright position despite the uncomfortable shuffling and prancing of his horse. He clumsily gathered up the reins and wheeled the recalcitrant horse round so he was facing Sam's grinning face.

"It was so close to my face just then, I almost could," Sam's grin widened.

Dean spent the next few moments fidgeting, adjusting straps, shortening stirrup leathers, and engaging in a long and thorough rearrangement of his underwear that made Sam feel highly uncomfortable, until eventually the brothers and their mounts were able to set off at a casual pace along the muddy gravel track.

"So how did you learn to ride these things?" Dean asked, swaying uneasily with the movement of his chunky mount.

"Jess;" Sam replied, "her uncle kept horses and she used to love to ride them, so he taught me so we could go out together."

Dean snorted. "Never appealed to me; I like a mode of transport that doesn't have a mind of it's own," he muttered. The stocky dun snorted and flicked it's ears disapprovingly.

Sam smiled, "it's not so bad, you've just gotta get inside their head, treat them so they respect you." He reached forward and patted the chestnut's neck; "we should call them by their names," Sam added, "they're used to hearing the sound of it, so it'll make them feel more secure".

He patted the placid chestnut again, "the farmer that I hired them from likes to name his horses after film characters; this is Indiana."

Dean stared. "Hannibal? Freakin' Hannibal - what does that make me? Clarice?"

Sam shrugged, "I just told the farmer you've never ridden one before and that's what he gave me. Don't worry, if I wake up in the night and find you've been skinned and dismembered, I'll know who to blame!"

As if on cue, Hannibal lifted his tail and demonstrated exactly what he thought of Dean's threat.

The two horses meandered through the dark forest canopy, their steady gait beating out a slow, gentle tattoo against the uneven gravel track. The early evening sunlight filtered through the mass of trees, dappling and mottling across their backs, flickering shadows across the brother's faces as they chatted amiably along the route.

They discussed the hunt at length. The chupacabra had been responsible for a spate of gruesome livestock deaths around the mountains; mainly sheep, but also a few cattle and a couple of ponies which grazed around the mountain tracks. A couple of hikers had turned up dead - eviscerated in fact, and a third unlucky dude had been mauled by 'a hairless kangaroo creature with a wolf's head, red glowing eyes and big, big claws'. He was currently convalescing from his ordeal in the psychiatric ward of the local hospital.

As the shadows lengthened, and it became harder to see where they were heading, they decided to set up camp while where was still a scrap of daylight in which to erect their tent and, with perfect timing, they found a small clearing beside a shallow stream where they could refresh the horses and low hanging trees where they could tether them.

Erecting the tent had proved to be a lively, frustrating and vocal exercise. It stayed up on the third attempt, having collapsed on the first and been kicked over on the second. Throughout, Sam was treated to a running commentary of how much Dean hated camping, how much he ached, how sore his ass was, which parts of his body hurt the most, and which parts had lost all feeling, including one part which Sam really didn't want to hear about.

Dean's mood lifted noticeably once Sam lit a fire and the burgers appeared. Relaxing with a bag of chips, he even began referring to Hannibal as his 'fat buddy'.

Satisfied and rested, the Winchesters sat quietly round the little fire tin staring lazily through pitch blackness into the dancing flames. Comforted by each others' company and the warm night breezes which carried the scents of Pine and Wintergreen, they soon found that the merry crackle of the fire, and the soft whittering of their tethered horses was lulling them both into a droopy eyed torpor, and sleep was soon beckoning.

Two pairs of long-lashed liquid eyes watched through the darkness as the tent zipped closed and quivered as the two occupants wrestled and squirmed their way into their sleeping bags.

"Shift over Sammy, you great freak, you're squashing me…"

"I can't freakin' move, I feel like a friggin' maggot trussed up in this thing …"