Once Upon A Time

I was reminded of this story when I was having a surf through Fanfiction.net the other day, so I thought I'd give it another airing here.  This is one of my longer stories, so I'll post one chapter a day for the next nineteen days. 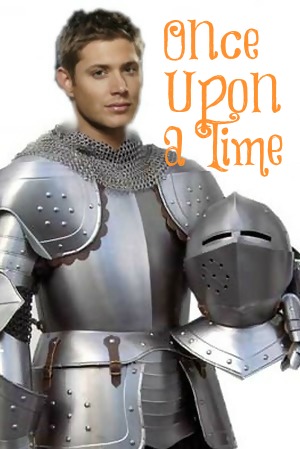 Summary: two brothers, a dangerous quest, a beautiful princess, a magnificent black mare with a give 'em hell attitude, and just about every fairytale cliché you can possibly imagine.

I wanted to write a Supernatural fairytale for ages, and this is it ... oh, and profound apologies to my precious and beloved Bobby Singer, for what I am about to do to you, I hang my head in shame!

Her golden hair billowed out behind her like a silken veil as she cautiously approached him. Emerging from intense blackness, her beautiful face, as pale and delicate as ivory, wore an expression of unbearable heartbreak and dread.

"Help me, noble prince," she pleaded quietly, reaching out to him with a slender hand half hidden by a voluminous sleeve of sea green brocade.

Her eyes of topaz-blue shone with unshed tears as she walked toward him, straight-backed and dignified despite her distress. Her bare feet, barely visible under her flowing gown, moved silently over the featureless ground.

He reached out to her outstretched hand, silently reassuring her, beckoning her toward him; desperate to grasp her hand and pull her into his protective embrace.

"Help me, please – help …" her desperate voice faded into silence as the blackness engulfed her and he found himself staring at nothing but a dark void.

Sam heard a gasping grunt as, behind him, Dean woke abruptly. He rolled over to face his brother who was sitting bolt upright in the room's other bed, panting harshly and staring wide-eyed across the moonlit room.

Dean regarded him silently. For a moment, only the sound of Dean's rapid breathing could be heard. Eventually, he seemed to calm, and gave a nod. Swallowing noisily, he followed it up with a shake of the head.

"Don' know," he croaked, reaching round for the glass of water on his nightstand.

"Well was it or wasn't it?" prompted Sam.

"Not a nightmare," Dean replied hesitantly, rubbing the back of his neck; "I jus' keep seeing this woman. She's calling for help, she's frightened of something."

"Woman?" Sam repeated, "someone we know?"

Dean swallowed another sip of water and shook his head. "Nah, don' know who she is; she's not familiar, but real hot though," he seemed to drift into some kind of silent reflection. "She's blonde and young and slim but curvy the way a woman should be; got these real pretty blue eyes and awesome full lips and …."

Sam frowned, waving a hand in front of him; "yeah, I get the picture Dean."

"There's something else weird about her," Dean continued.

Sam cocked his head curiously; "what? Like in the fifties or something?"

"No," Dean shook his head; "way older than that. She's got some long velvety green dress on with the big flowy sleeves, kinda like you see at the renaissance faires. Medieval, that's it; it looks medieval."

Dean looked up at Sam for the first time since they had started to talk; "she's asking for help, Sam."

"What sort of help?"

Taking a deep breath, Sam continued; "Dean, are you saying this is some kind of vision?"

Silhouetted against faint rays of hazy grey moonlight, Dean shrugged again; "no … yeah … I don't know. It can't be. I only see her at night when I'm asleep, it must be just a dream; a really weird, freaky, recurring dream."

Turning to Sam, Dean looked up at him and nodded; "yeah, I've seen her every night for about two weeks now."

"And has she always asked for help?"

"Have you ever been able to help her?"

"No," Dean sighed; "It's like I'm seeing her through my own eyes and we're walking toward each other, but before I can reach her …" Dean's voice tailed off and he blinked rapidly, chewing his thumbnail.

"What?" Sam urged; before you can reach her, what then?"

"Nothing," Dean replied; "before I can reach her I always wake up."

"So, what d'y wanna do about it?" Sam asked quietly, aware that whatever this was, Dean seemed to be quite rattled by it.

"What can I do?" Dean sighed, "she's just some random chick in my dreams."

Sam sat staring through the darkness as if deep in thought. "Well, yeah, but she's different from the usual chicks in your dreams," he added; "she's got clothes on for a start."

"you're not funny bitch," Dean huffed petulantly; "not even a little bit!"

Sam smiled; "but seriously, if this is bothering you, and you're not sleeping; we should try to do something about it."

"Although," Dean shot a sideways glance at Sam with a wicked grin on his face; "your hair's funny, I'll give you that."

Sam ignored Dean on the basis that it was probably best not to encourage him, and tried to continue. "Our experience …"

"And when you do that bitchface thing that looks like you're suckin' a lemon, that's pretty funny too." Dean was clearly on a roll; a very annoying, typically Dean-trying-to-pretend-everything's-peachy roll.

"Well, our experience has taught us that we shouldn't take weird dreams for granted," Sam began with an exaggerated eye-roll; "why don't you keep a notebook by your bed and write down what you've seen as soon as you wake up." He paused in thought for a moment; "that way we can see if there's any pattern to these dreams, or clues or if anything in them changes?"

"How can you be such a friggin' geek at two o'clock in the morning?" He snorted.

"Go back to sleep jerk;" now it was Sam's turn to grin as he knew Dean had accepted his suggestion.

Dean grunted something unintelligible then subsided back down onto his mattress, rolling onto his side and throwing the crumpled grey mass of the quilt back over his shoulder.

Laying back, Sam stared at the ceiling and thought of pretty medieval ladies. It wasn't long before his brother's soft snores drifted across the room, lulling him to his own rest.