Hair of the Dog - Chapter 2 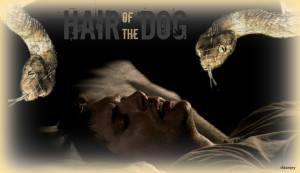 Dean thrust his hands deep into his pockets and scowled, glancing around him, unimpressed. "So Sammy, remind me why I'm standin' here at the end of world, freezin' my awesome ass off in the middle of the friggin' night?"

Sam sighed from behind the Impala's open trunk.

She was parked in a desolate patch of wasteland with a long abandoned quarrying history; a bare and barren moonscape littered with boulders, pot-holes and craters; it clung to the edge of a deep and tangled forest, it's sparse, dry brush twitching forlornly in the night breeze.

"I could be in bed," Dean mumbled irritably under his breath, leaning back against the hood. "or in a bar …" Craning his head back, he huffed out a wisp of vapour trying to make an 'O' and failed.

"We're lookin' for a Lyndworm Dean;" Sam peered around the car, sporting his finest bitchface. "Didn't you listen to word I said yesterday?"

"Ah Sammy, give a man a freakin' break – you were talkin' to me in the middle of America's Next Top Model … my concentration was wanderin' a bit!"

Sam sighed with a shake of the head; "well, concentrate now; this thing is damned dangerous!" Dean at least had the decency to look admonished. "Fourteen walkers and climbers have died around this spot from unidentifiable giant snake bites in the last two months; another eight are missing without trace – presumed eaten."

He stared at Dean who looked distinctly unimpressed.

"So, we're lookin' for some souped-up rattler? Why can't the Parks Authorities clear that up?"

"OK Dean; for one thing, workin' from the fang marks in the victims, it's likely this thing is twenty feet long or more; two, the venom is 100% lethal - slow an' nasty and it's completely unidentifiable and untreatable by modern medicine; and three, it's not a snake it's a member of the dragon family – it has vestigial front legs."

Dean stared at Sam. "I don' know what scares me more – the fact that we're looking for a 20 foot snake or that you used a word like vestigial … what in the friggin' hell are vestigial front legs?"

"Small and useless" snapped Sam, resisting with every fibre of his being the urge to add 'like you'; "an evolutionary remnant."

Dean continued leaning against the Impala, amusing himself by huffing out vapour clouds.

"The Lore on this thing is real old - dates from medieval times, most European dragon lore does; the general opinion is that iron does the job," Sam replied, slamming the trunk closed and handing Dean a long, vicious looking iron spike, retaining another himself; "but like all reptiles, it's skin is like armour, you've got to get it in a vulnerable spot like it's eyes or it's belly to kill it."

Dean thought for a moment, and then turned to Sam, "Sammy, how come if this thing is 20 foot long, no-one's seen it? I mean, it's not the kind of thing that can curl up under a rock or live in someone's U-bend."

"The skin has chameleon qualities," Sam replied, "it's skin can change to match it's surroundings to the point it's virtually invisible".

"You can bet those poor bastards who died didn't see it until the moment they felt it sink it's fangs in." Sam spoke distractedly as he rummaged in his rucksack.

Dean rubbed his forehead; "Okay, so then geek-boy, riddle me this … if this thing is so hard to see, why the hell are we huntin' it in the dark?"

Sam made a mental note never to even attempt to speak to his brother during 'America's Next Top Model' again.

"Because," Sam pulled a gadget out of his rucksack with a flourish, "the one thing it can't camouflage against is night vision goggles!"

"This is ground zero Dean, the GPS point at the epicentre of all the attacks – if this thing is going to find us; it'll be here!"

Sam lifted the goggles to his face and began to carefully scan the rock-strewn landscape.

Dean was silent, seemingly lost in thought, until he spoke up. "Sam?"

"What?" Sam hissed, from behind the goggles.

Sam looked away from the goggles for a moment; "there is a cure, but it's not the kind of thing you'll find in the family medical encyclopedia." He smiled, "Lyndworm blood."

Dean stared at him, "Lyndworm blood?"

"Yup," grinned Sam, "Lyndworm blood is the only cure against its venom".

Sam patted his rucksack, "all taken care of dude …"

Dean shook his head. "My brother has a bottle of dragon blood in his bag – and I'm glad. Man, our lives are so screwed!"

"Just gotta know the right contacts on the internet!" Sam smiled as he raised the goggles to his eyes once more.

Dean yawned as he watched fingers of early dawn light trace a line of fire across the horizon. Sitting, knees drawn up to his chest, leaning against the Impala's wheel, he was tired, hungry and bored.

"Sammy, there's no sign of this scaly sonofabitch. I'm tired an' I'm starving - lets give it up, we can come back tomorrow or somethin'."

Sam scanned the horizon and yawned; nodding a reluctant agreement as he opened the Impala's trunk to pack away for the night.

He felt the Impala lurch, and looked up to see the faintest outline of a huge coiled body snaking over her roof, axle bowing under it's weight. The undulating body shimmered like black liquid against her flawless paintwork. Sam gaped, paralysed in momentary shock, but a sudden and hideous strangled cry jolted him back to his senses.

He looked down, his face paling in horror; "DEAN!"

Beside the Impala, Dean was curled up on the ground, arms pinned to his sides, gaping silent and open mouthed as thick coils closed around him, tightening and crushing. Crimson-faced, he gasped and kicked helplessly as Sam sprinted around the car, dodging a huge head which flashed angrily at him with a vicious hiss.

The creature's body was easily the breadth of Sam's chest, flickering and pulsing as it's kaleidoscopic skin mottled and faded around it's surroundings; it's massive coils completely swamping the elder Winchester, with only his weakly twitching legs visible.

Sam thrust the spike at the creature's blurred outline, blinking as he tried to focus on it's indistinct form, making contact with the larger, softer scales across it's belly. It gave a shrieking hiss and lunged viciously at him, it's black blood spraying across his shoulders as he leapt blindly out of it's range, feeling it's hot breath raking the back of his neck.

It lunged again; wide open mouth prominently scarlet against it's obscure, pulsing outline, bearing down on him; long, curved fangs dripping yellow venom. He rolled to one side as it's head smashed into the ground where he had been lying only a second before; it's snout making contact with bone shaking force, dazing it long enough to enable Sam to stumble backwards out of it's range.

He stared up at the creature's body as it arched upwards, looming over him and pinning him against the Impala, flickering in and out of his range of vision like a dying candle flame.

Sam swallowed hard when he saw Dean's unmoving feet, all that was visible of his brother from within the massive scaly knot.

Sam knew he had to act now; blindly thrusting the spike at the creature again, he caught it behind the eye, drawing more thick black blood. It hissed and thrashed, knocking the spike out of Sam's hands with arm-wrenching force. He gasped and managed to grab the fallen spike as the massive head bore down on him again, hissing, and spewing acrid, burning saliva as it lunged at him. With a last desperate effort, he thrust the spike upwards into it's mouth skewering it through the back of the throat.

It's whole body convulsed, skin colours cascading and flashing wildly, forcing Sam to shield his eyes. It uncoiled and thrashed, shrieking and squealing, giving Sam enough time to dart round the back of the impala to grab the second spike. Keeping a close eye on the massive plunging body, he rammed the stake hard into it's belly.

It arched into one mighty spasm, then fell limp to the ground, with a massive crash, into a mass of dust and flying debris.

Sam dropped to his knees, gasping heavily, and coughing through the choking dust, before crawling across to where Dean lay face down, pinned under the colossal creature's dead weight. He dragged his brother's limp form out from under the huge corpse, gently turning him over and laying a large palm flat against his chest, relieved to feel a heartbeat driving shallow, panting breaths.

"Hey Dean, talk to me man", he murmured softly as he brushed the coating of dust from his brother's face.

He took the opportunity to conduct a quick physical check, gently palpitating his brother's rib cage feeling for any crush damage. As he worked his way down the still body, Dean stirred with a soft grunt, "Hey, man" Sam smiled, "I'm not feelin' you up, so don't even ask!"

As he pressed on the floating ribs at his brother's left hand side, he felt a damp warmth, and noticed Dean's brows knot in a pained grimace; concerned, he lifted his hand away and was horrified to see it was slick with blood.

Trying to ignore the crawling stabs of fear in his chest, he lifted the hem of the shirt, pulling it halfway up his brother's chest. His guts turned to water when he saw a mass of pooling blood across Dean's stomach, and just above his left hip bone, two perfectly round puncture wounds.