Hair of the Dog - Chapter 1

I've decided to give another of my older stories an airing.  It's a hurt/comfort story, and one which I really enjoyed writing - heck, I really did put Dean through the wringer here; I'm such a bad person ;) 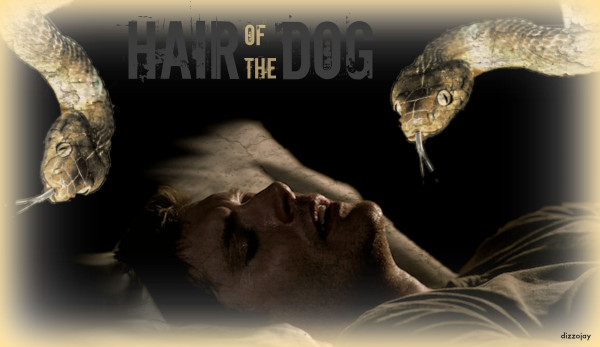 Sometimes, the cure is worse than the disease ...

Author's Note:
This story was also the second outing for my favourite OC, Tom.
A word on Tom; Tom Matthews is my OC; he has  been seen before in my story 'Dry' where Bobby describes him as an old friend, a Doctor who runs an 'off the books' clinic looking after hunters. He is short and plump with expressive dark brown eyes. In their first meeting when Dean was, once again, in bad straights, Sam liked him and trusted him on sight.

Fever-stricken, Dean shivered miserably in the bed; he breathed in the musty notes of poorly aired bed linen and old books that surrounded him.

He knew the room very well; it was decorated, if you could call it that, for practicality not for aesthetic quality; clean but cluttered with books, manuscripts and assorted junk. He was in the room at Bobby's house that the Winchesters called their own.

This time, however, there was no comforting familiarity to the room. It felt somehow different; soulless, empty. There was no smell of Bobby brewing coffee downstairs, no radio, no sounds at all, even Rumsfeldt was silent. No fluttering of the curtains in the breeze from the open window; in fact, no breeze at all. The air was as still and as featureless as the plastered walls which surrounded it.

The silence surrounded Dean, stifling and suffocating him. Too weak even to move, his fever bright eyes glanced around, scanning the room uneasily. He opened his mouth to call for Sam, but no sound other than a wheezing huff of breath came out.

Suddenly he heard a sound, a tiny, barely audible scuffle. It was followed by another sound, a skittering, scratching sound; light as a whisper.

Widening, nervous eyes continued to scan the still, silent room. A harsh breath caught in his throat as the scuffle sounded again; closer this time.

Then he saw it; a rat. It clambered over the wooden bed frame, and scurried across the blankets. When it stopped, it was sitting on the deepest point of his chest, it's tiny, quivering body gently rocking with his progressively more rapid breaths.

For what seemed like the longest time, they stared at each other. Glassy green eyes stared wide and unblinking at tiny beady, impossibly black orbs.

Dean's eyes broke their focus from his tiny companion as he heard another sound; a tiny scrabbling rustle, impossibly quick and light; his breath hitched at the sound. This time it seemed different; louder maybe? Heavier? Then he realised; multiple. The sound he was hearing was not a scuffle, but lots of scuffling. Far more sound than any one rat could make.

Nervous eyes widened further, tears pooling. He tried to rise, pushing the blankets back, but his muscles failed him.

Feeling like he was pinned to the bed, he watched in horror as another small pointed grey head appeared over the foot of the bed. Jerking wildly, he tried to move, but his attempts were futile.

More rats were now climbing over the side of the bed, a chorus of chittering, squeaking sounds, overplaying a backbeat of scuttling and scrabbling, amplifying as more and more tiny grey bodies squirmed and darted over the side of the bed. Dean convulsed and thrashed, his breath coming in gasps as he tried desperately to escape the banks of tiny grey bodies and trembling whiskers which were congregating on and around him.

He cringed, letting out a hoarse yelp as he felt one squirm it's way under the blankets and scamper along the mattress against his side.

He had lost count, now there were so many, swarming and pouring over the side and bottom of the bed, writhing and squirming on top of and inside the blankets. He gagged at the sour odour of their greasy fur, bucking as they scampered around and over his helpless body; tiny cold feet with needlesharp claws clambering across his twitching legs; clammy fur and trembling whiskers brushing against his arms, yellow, gnawing teeth tugging at the soft fabric of his t-shirt.

He was screaming now, incoherent cries of terror; the word 'Sam' still not able to form in his throat; head thrashing from side to side; the bed was now a throbbing mass of squirming, greasy, tiny grey bodies, wriggling and massing, a single pulsing organism of rats, on his pillow, smothering and surrounding him. A deafening white noise of chattering and squeaking consuming him.

Bobby, Tom and Sam all held Dean down as he thrashed wildly in the throes of some terrible nightmare. He twisted and arched frantically, grotesque contortions so violent that Sam was genuinely frightened he was going to snap his spine.

Dean was as strong as a bull; they all knew that; but in this condition, it was taking every ounce of their combined strength to hold him down, to stop him from hurting himself further than he had already been hurt. He was little more than a wild animal, reduced to the basest instinct of staying alive – whatever it took.

Sam leaned over, desperately trying to soothe his delirious brother, drag him out of his dreadful reality; staring intently into the glazed, terror-stricken eyes; trying to be visible as he barked the mantra of Dean's name over and over as he had done during the previous terrible episodes Dean had suffered as the vicious poison and it's equally aggressive antidote wreaked havoc through his body.

Dean's skin was slick with sweat as the fever burned hotter and hotter, making it harder to hold onto him, and it was only after the terrible episode had begun to subside that Sam realised with horror that he had gripped Dean's arm so hard his nails had drawn blood.

The three men stood back as their patient sunk limply into the sweat-soaked mattress, returning to his restless, haunted sleep; his ragged gasps gradually subsiding back into the harsh laboured breathing that had become his norm.

Sam turned from the other two men in the room, shaking as he wiped his eyes, struggling to regain some composure.

Bobby hadn't been exaggerating when he said that the Lyndworm blood was a powerful hallucinogen. Sam prayed it would all be over soon, he didn't know how much more of this punishment Dean could take.

He didn't know how much more he could take.