Wish You Were Here - Chapter 11 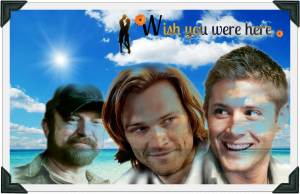 Strangely adrift on suddenly finding himself alone, Sam settled in beside the pool with a rapidly melting mint choc-chip ice-cream and closed his eyes partly so that he could lay back and enjoy the sun's soothing warmth on his face, but mainly to try to avoid looking at the honeymooning couple who had taken up residence on a pair of loungers right opposite him and were currently engaging in an energetic tussle in which the ultimate aim seemed to be to eat each others faces.

After a few excruciating moments of blindly chasing melting droplets of mint ice cream down the sides of his cone whilst trying hard not to listen to the giggling and groaning emanating from the writhing four-legged heap across the pool, he eventually cracked open an eye and frowned.

Wandering back up to the room, he took a long refreshing shower, then suitably cool and freshened, he was drawn to the balcony. No affectionate and vocal gymnastics here, just the gentle roll of the turquoise tide breaking softly against the beach below him.

For a while he sat and listlessly scanned his book; Dan Brown's words skimming across his line of vision, but not sinking in. All he could concentrate on was how empty the balcony seemed without his dewey-eyed brother sitting on it gazing longingly over the ocean.

Phoning Bobby again, he sighed when the older man's voicemail invited him to leave a message, and headed down to the beach, meandering aimlessly along the glimmering sand throwing stones into the encroaching tide.

He sat awhile, losing himself in his thoughts as he watched the sinking sun cast a russet stain across the darkening horizon, then decided to head back to the pool, hoping that love's young dream had decided to take their athletic proclamations of affection back into the privacy of their room.

Dusk was beginning to fall when he approached the brightly lit poolside, and as he reached the pool he heard a rhythmic splashing. Taking a glance into the water he saw Dean ploughing across the pool at an easy backstroke.

Given the rare occasions he was actually called upon to do it, Dean was a surprisingly strong swimmer. His broad muscular shoulders and long arms were purpose-built for the job, and Sam folded his arms, watching in fascination as Dean moved swiftly and smoothly through the water. He noticed that even after only two days, Dean had already caught the sun, a faint tawny sheen which coloured the bridge of his nose and his cheekbones was also evident across his chest and shoulders as his body arched out of the water with each leisurely stroke.

With his eyes closed and his pursed lips huffing out long slow breaths, he looked a picture of relaxed elegance. Only the Garfield shorts and the inflatable dolphin bobbing around the shallow end of the pool somewhat shattered the illusion.

Sam felt his face drop into a soppy smile.

A few moments passed before Dean, without opening his eyes or missing a stroke, spoke up.

"You gonna stand there like a wet drip droolin' over me all night or you gonna get your pervy ass over to the bar an' get me a drink?"

He did a slow barrel roll in the water and kicked for the side.

"Pina Colada," he shouted up to Sam, his broad smirk almost splitting his face in two; "an' don't forget the umbrella, bitch."

Bobby pored over the files He'd managed to acquire from the pleasantly helpful if not terribly smart mortuary technician. He really was groping in the dark here. Judging from the autopsy pictures, the three guys in question clearly looked after themselves; all had been in excellent shape, which meant there was no earthly reason why any of them should have keeled over with heart failure of all things.

One maybe? One could have been one of those shockingly tragic flukes of the very worst kind that happens occasionally, but three? Nah; this was no fluke.

Bobby's visit to Des this morning hadn't been quite as productive as Bobby had hoped; the guy sounded almost cagey when Bobby had pressed the issue. He'd more or less repeated what he'd told Bobby yesterday, nodding in empathic concern when Bobby had voiced his worries that he had two stepsons in tow and both of them seemed to fit the prime 'at risk' category for this – thing – whatever it was.

Management weren't saying anything about the whole horrible situation, and they'd apparently made it very obvious that they didn't like staff talking about it, especially to guests. Bobby shrugged: the guy was concerned for his job. Can't blame him; no-one had any cash, the world was going to shit. People needed their stability where they could find it.

He ought to become a hunter and then having no friggin' cash was the norm. It was a stability of sorts …

Pinching the bridge of his nose, he blinked hard as the tiny print on the reports blurred. Bobby had read far too many of these damn things over the years; he'd spent a depressing amount of time in mortuaries, far more than any sane person would ever want to; learning, over the years, a fairly encyclopaedic knowledge of medical jargon, drug names, and anatomical terminology.

A knowledge that enabled him to grasp the significance of a single word that appeared on all the reports, buried inamongst paragraph upon paragraph of unfathomably dry clinical ramblings …

He knew that Oxytocin was a hormone produced by both male and female bodies. It only appeared in any notable quantities on certain occasions, most notably during childbirth. So, okay, that clearly wasn't an issue here, given that all the vics were guys, but there was also another occasion when Oxytocin could be found in the body at highly elevated levels ... during sexual climax.

The report stated that levels found in the Mau Loa bodies were four hundred percent higher than had ever been recorded.

Bobby's eyebrows took a slow march upwards; "damn … what a way to go!"

He snapped the folder shut and his heart plunged into his guts.

He handed the files back with a warm smile and a nod of thanks to his friendly, totally unsuspecting partner in crime and made his way out of the hospital; concentrating on getting back to the boys before they suspected anything was afoot.

Turning on his phone, he dialled a familiar number, smiling as an equally familiar voice sounded on the line."Hey secret shopper, maxed out your credit card then?"

"Yeah, he's here," Sam smiled, glancing back to Dean, still fooling around in the pool; "Leylaani managed to shake him off eventually;" he chuckled as Dean made a big show of ignoring him, "you should see him, Bobby; he looks like the cat that got the cream;" he effected the most teasing sing-song voice he could manage, "he's in luuurve, Bobby … Dean and Leylaani sitting in a tree, K-I-S-S-I-N-G …"

Dean swam casually past him, presenting a single raised finger over the side of the pool.

Bobby tried to keep the panic out of his voice; "okay, Sam on my way back, get that beer on ice."

He fidgeted and fretted as he stood waiting for the bus back to the resort; glancing at his watch and trying to look outwardly cool and unruffled for the benefit of passers-by when in actual fact he wanted the darn thing to make the whole journey in record time with a rocket up it's tail pipe.

He knew now those unfortunate guys had fallen victim to a succubus; a shapeshifting female demon of sorts. A merciless seducer of men with a voracious sexual appetite which violently and fatally drained every trace of her victims' life force. She was fussy about her prey too; she was only interested in fit, strong guys, young and virile enough to give her a good invigorating dose of what she needed.

He couldn't get one word out of his mind and his heart broke for Dean.