I never could resist a good meme!!


1:What is your Supernatural OTP?

I try so hard to understand and sympathise with John - I wouldn't go so far as to say 'like'.  I get that he lost his soulmate to a terrible force and that it damaged and embittered him in ways I can't possibly describe.  And I understand more after hearing JDM speak so eloquently about what made John tick at Asylum 14.

And I know he gave his life for his son which is an incredibly brave and noble thing to do.

That said, whenever I see the trainwreck that the boy's lives have become, and see Dean's crushing self-loathing, and Sam's bitterness at never having a normal life, and when I watch season one and see Dean physically shrink in his father's presence, I just ...

3:Which season finale was your favorite/least favorite?

I think I'd have to say All Hell Breaks Loose, closely followed by No Rest for the Wicked.  The emotion in both of those finales was overwhelming and I'm sort of glad I wasn't aware of Supernatural then, and watched them first time on DVD so that I didn't have to wait four months to find out what happened!

Least favourite, I'd probably have to say The Man Who Knew Too Much.  It just didn't raise my roof, I'm afraid!

4:Which is your favorite episode?

I could probably name a dozen which I really like.  I tend to favour the funnier, more Dean-centric episodes, so some of my favourites include Mystery Spot, Yellow Fever, Monster Movie, Tall Tales, Frontierland, Changing Channels, and French Mistake to name a few, but ...

Fan Fiction just made my year!  It was absolutely inspired, and really made me realise how special this Supernatural phenomenon really is.

5:Which episode makes you cry the most?

A Very Supernatural Christmas always gets me going at the end!

6:Which episode is the funniest to you?

The French Mistake was just hilarious.  The scene with Sam and Dean's horrific acting was inspired.  I watched it about five times before I could sit there without cringing :)

7:What’s your opinion on Megstiel?

I have no opinion.  It happened, I took very little notice of it!

8:When did you start watching Supernatural?

Christmas 2009.  The season 1 box set was a random Christmas present from a friend.

9:Which episode title do you think is the funniest?

Criss Angel is a Douchebag - that always makes me smile!

10:What’s your opinion on Garth?

I love Garth, he's cute and quirky.  Not so sure about Werewolf Garth ... my jury's out on that!

11:If you could bring back any character, would you? If so, whom?

12:Who is your favorite angel?

Got to be dear old Castiel

Gabriel - especially when he's up to his Trickster tricks!

14:What’s your opinion on Wincest?

I have no objection to it.  If I'm seeking slash, I don't tend to look for Wincest, I'm a J2 girl, but I have read quite a bit of Wincest and I've enjoyed it

Lisa was good for Dean, and I'm sure Ben was a mini-Dean.

16:When did you start blogging about Supernatural?

17:Do you think that Chuck is God?

19:Which is your favorite episode?

Ooh, think we've done this one!

21:What’s your opinion on Destiel?

I like it, if I read character slash, I'll tend toward Destiel.

22:Did you like the first or second Ruby better?

Difficult to say.  I like them both, but my husband likes 'dark Ruby' better than 'blonde Ruby'.  He says it was for her acting talent ...

24:Do you read smutty fanfiction?

25:Do you think Destiel will become canon in season 11? (Regardless of whether you want it to or not)

No.  I think there is a love between Dean and Castiel, and I think it differs slightly between them, but it's completely platonic.  I think Castiel has grown to love Dean as a brother.  Dean has a brother, I think he loves Castiel as a best buddy.

26:Have you ever had a dream about Supernatural/the characters/the actors? If so, can you describe what you remember?

Probably, but sorry - I can't remember.

27:Which episode is the scariest to you? (Horror-movie type scary)

28:What’s your opinion on Sabriel?

Not for me.  If I am going to read slash, it has to involve Dean or Jensen.

29:Do you think End!verse will happen? If so, are you looking forward to it?

Dreading it, but I think it will be epic!

30:Do you have any friends off of the Internet that watch Supernatural?

Donna, a lady I work with and corrupted.  She really likes it.

31:Do any of your family members watch Supernatural?

My husband - does he count?

32:What’s an unpopular opinion or headcanon you have?

I liked Bella, and I know a lot of people can't stand her, but I don't know how unpopular that opinion is.

Sometimes, depending on the circumstances.  I tend not to be interested in fics where the boys are teenagers or at high school/college.

34:Have you ever written/started writing a fanfic?

My Fanfic.net account says I have written 489 fanfics.  Probably three quarters of those are drabbles.

35:What’s your opinion on Samifer?

I really liked him.  I think Jared bought a resignation and sadness to Lucifer that almost made me feel sorry for him!

36:If you have an OTP, at what point did you start shipping it?

Don't really go in for the whole 'shipping' thing.

37:Do you think Sam should have completed the demon trials?

Maybe, but if he had, yes, the doors to hell would be closed but we would have ended up with Dean trying to bring Sam back to life and probably causing some other total shit storm in the process!

38:Which director/writer is or was your favorite/least favorite?

To be honest, I don't tend to take a lot of notice of who writes/directs episodes.

39:Which actor would you most like to meet in real life?

I've met many of them and without exception they are delightful.

40:If you could be any character on the show, would you want to? If so, whom? If not, why?

I'm not sure I'd want to be - most of the characters on the show are completely screwed up.  Although being King (Queen?) of Hell looks like fun :)

Both - I don't discriminate desserts!

42:What is your opinion on Sastiel?

Not for me - as I said above, for me, slash has to involve Dean or Jensen.

43:Have you ever made a Supernatural reference out loud and received strange looks from some of the people surrounding you?

Look, I take my Funko minis out in public and photograph them standing in my food.  Strange looks are nothing new to me!

44:Have you ever cried over a non-OTP ship from the show?

45:What is your favorite moment from any of the gag reels?

Oh where to start? Jared splitting his trousers, Jared's farts and poor Jensen wrestling with his shirt when he's trying to undress for a love scene.  Honorable mention to Jensen when he's pleading to the camera about the torment he's getting and how it's torture!

I like all three shows, but wouldn't ever read crossover slash.

Sam's hair is the eighth wonder of the world - I loved it all except for the hideous sideburns in - was it - Season 5/6?

48:What’s an unpopular ship you have?

49:What’s your opinion on Wincestiel?

51:Do you listen to Carry On Wayward Son even when you’re not just watching a finale?

Oh yes.  I have the original Kansas version and the Fan Fiction version on my Ipod :)

52:What’s your opinion on Zachariah?

Complete git, but a great villain.  I think I may have cheered a bit when Dean stabbed him in the throat!

53:Do you think Adam will ever get out of the cage? (not as Michael)

Probably not, this question has been asked at the cons, and the answer has always been that there's no plans for Adam to be released from the cage.

54:Do you think Sam should have completed the trials?

55:How long would you survive as a hunter?

56:What’s your opinion on Calthazar?

Interesting, but not for me!

57:Do you have a Netflix account? If so, what’s your username and password? Wait a second, just the first part.

58:Have you ever participated in GISHWHES?

Not yet, but I'm registered to do it this year!  *excited*

59:What movies/shows have you watched because of (or by coincidence) Jared, Jensen, or Misha?

Everything I've watched with them in has been because of Supernatural, but I've seen My Bloody Valentine, Ten Inch Hero, Flight of the Phoenix, Stonehenge Apocalypse (oh dear!), Smallville, and Dark Angel.

60:If you could change just one thing about the series, what would it be?

The first half of season 8 - Sam not looking for Dean and going with that charmless drip Amelia instead.  NO!  No, that was just wrong in every way.

61:If you were at a Con, what would be a question you would ask?(can be any of the actors)

There is one question I'd like to ask Jensen  (either on his own or with Jared).  I'd like to ask how he thinks the characters' personalities and quirks would have evolved if he had taken the part of Sam as he was originally asked to read for Sam's part.

So far I've never managed to get even close to the front of a Jensen question queue!

62:Why did you start watching Supernatural?

Someone had bought me the box set and it looked like the kind of thing I like!

63:What’s your opinion on Sam/Crowley?

Again, not for me!

That it will be the last season!

65:What’s your favorite (or at least a memorable) pop culture reference that has been made on the show?

I loved Dean's 'You full-on Swayze'd that mother', and Harry(Ghostfacer) - 'sweet Lord of the Rings!'

66:Just a random confession you have regarding the show/Asker makes up their own question.

Random confession:  I have written an inordinate amount of fanfics where Dean ends up naked.
I stand and await my judgement ... 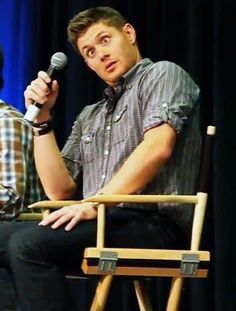 Jensen says "Wow, that was a long meme!"
Tags: facts about me, meme-y stuff, supernatural
Subscribe