Wish You Were Here - Chapter 4 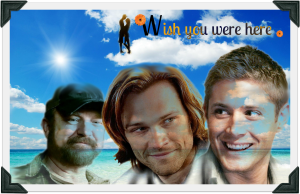 Back in the grey, mildewing confines of their room, the brothers busied themselves sifting through all their purchases, cutting off labels and folding up their new clothes.

Dean had been stewing silently ever since the exchange in the store, and Sam was gradually wilting under the toxic atmosphere.

"Look dude; whatever I said in back there that upset you, I'm sorry 'kay?" He blurted eventually.

With his back still facing Sam, Dean stopped his folding and stood motionless for a moment before turning.

"No, I'm sorry;" he sighed; "I've been tryin' not to get too worked up 'bout the flight but I guess it's not workin'.

Sam's face softened. "It's not too late to back out Dean;" he reassured, "It hasn't cost Bobby any money."

Dean shook his head. "No but we've just spent a fortune on all this;" he gestured expansively across his bed which was buried beneath a jumble of folded clothes, bottles of various shapes and sizes, paperback books and one partly-deflated inflatable dolphin.

Sam gave a small smile; "well, technically it's Mastercard that's spent a fortune on all this, not us," he muttered apologetically.

Dean returned the smile and dropped down to sit on the edge of the bed.

He shook his head; "No Sam, don't let me talk myself out of this trip, please; we all need this vacation, you, me an' Bobby, we all need a break." He hesitated, staring at his feet for a moment before continuing; "an' I want this trip, Sammy, I wan' it so bad it hurts." He looked up at Sam in despair, "I haven't had anything in my life to get this excited about since, like, never, so please, Sam, please don't make it easy for me to talk myself out of this."

Sam hopped up off his bed and cleared a space among the scattered clothes to sit down next to Dean; "OK, so why not, then?" he encouraged; "lets go to the doc tomorrow, and get you a sedative. Then, nothing to worry about; you'll be in happy la la land all the way through the flight."

Dean shook his head. "Nah, did that once before, an' it didn't work out so well."

"Not long after you wen' to Stanford," Dean began; "Dad wen' after a Waheela in Fairbanks, and got us a flight up there."

"He didn't know about my, um, flying 'thing' an' I guess I jus' panicked." Dean hesitated as if the memory was painful to recall. "I didn't want to make a fuss because I would have had to tell Dad why and he would have thought I was bein' a pussy, so I had a doctor give me some Lorazepam an' I guess it kinda worked because I don't remember much about the flight, but then I felt really crap and lethargic and my memory was shot, an' I got dizzy an' stupid for a few days afterward."

"An' cause I wasn't functioning properly, I messed up on the hunt, an' nearly got Dad killed."

Dean was silent for a moment as he processed the difficult memories.

"I nearly got Dad killed Sam, just cause I was too frickin' yellow to get my ass on an airplane. I had to explain what went wrong, which meant comin' clean an' Dad nearly tore me a new one."

Anxious not to interrupt, Sam eventually spoke up; "what did he say?"

Dean took a deep breath; "he told me I needed to man up an' to get out of his sight."

He looked back down at the floor; "it was a long time before he came close to trustin' me again."

Sam clenched his jaw in anger. He knew his father was a good man, despite all their differences, he was a decent, if misguided, man, but sometimes … he closed his eyes and counted to ten.

He'd got as far as seven when Dean continued.

"Anyway, I don't wanna take any of those stupid meds cause if I feel like crap and get all dizzy an' useless, I'll ruin the trip for all of us."

Sam threw caution to the wind and cupped Dean's shoulder in his hand.

"Dean," you shouldn't keep beating yourself up over this; lots of people don't like flying, and that doesn't make them cowards or stupid."

He continued, fishing for the right words; "you don' wanna pay any attention to Dad. You know what he was like when he got pissed about something like that, he was inclined to say the first stupid thing that came out of his mouth in the heat of the moment, and sometimes it was hurtful, but you know he didn't mean it."

He wasn't sure if he was getting through to the silent figure next to him; "Dean, I'm scared of clowns. What does that say about me? At least a fear of flying is rational!"

Dean cleared his throat, and seemed to snap back into himself a little; "yeah, well, I did drop you on you head when I was changing your diaper once," he replied across a deep sigh.

Sam grinned; "that says it all!"

A few moments silence passed between the two men before Sam spoke up again; "so are we good?"

"Yeah we're good," Dean smiled and shucked Sam's arm from across his shoulders.

"Anyway," said Sam, scraping fingers through his unruly fringe, "so what are we gonna do about this flight? Why don't we go to see the doc, an' tell them what happened, and they might be able to prescribe something else that won't affect you so bad."

Dean shook his head; "don't wanna take the chance; I'm scared it'll mess me up 'cause I don't wanna miss a moment of this vacation Sam, not a single second. We're only there for two weeks. I'll rely on what I know; the Sominex and the Dramamine."

Sam smiled; "okay, we'll get you dosed right up on those an' you'll be high as a kite all the way there and back. Sounds good to me!"

Dean cocked an eyebrow at Sam; "bein' high is the general idea when you're in a plane, Sammy."

And so it was that a crisp Fall morning saw Mr Robert Singer, veteran of the auto salvage industry and his two step-sons, Dean and Sam Winsborough clamber out of a cab and walk hesitantly through the automatic doors into Minneapolis St Paul Airport, dragging two overstuffed suitcases behind them.

The doors slid closed with a soft hiss behind them.

Their adventure had begun.