I've been having fun going back through some of my old stories, and I'd forgotten all about this little snippet that I wrote about three years ago.

This is something completely different (in the best traditions of Monty Python), and I think it deserves another airing!

The Winchesters don't usually have an audience for their salt and burns. But tonight someone's watching ... 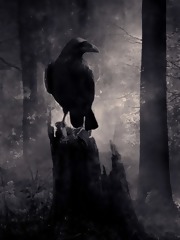 Moonlight shimmers over his iridescent back like water over onyx;

As he's done his entire life.

In the twisted carcass of an ancient yew, he sits;

and watches over the cemetary.

But tonight is different.

Dropped a spark into the ground;

smiled as flames reared up to meet them.

And then they left.

The crow quietly preens stinking ash out of his plumage;