Mr D and I went to New York in April 2001 for my birthday.  During our stay, we went up the world trade centre and had a cup of tea and a slice of cake in the restaurant there at the top of one of the towers (I can't remember which one).

There was a nice lady on the till and she was teasing me about being British because I wanted milk with my tea.  Then I couldn't find the milk and we had a laugh together.  It was one of those 'ships that pass in the night' moments.  I didn't know her name and she didn't know mine, but for a brief moment, we connected.

Fast forward six months.  I was working at Apple UK at the time.  Apple, obviously being an American company.  I'd just finished my lunch when I got a text from Mr D.  'You need to get the news up on your internet'.  Almost imediately after I'd read his text, I heard a noise across the office.  It sounded like a choking howl.  A sound of pure anguish that dissolved into someone crying.

I logged onto the internet after the first tower had been hit and about five minues before the second one hit.  I watched that one live with wide-eyed horror and disbelief.

By now, there were several people in the office crying.  The horror of the towers collapsing was yet to come, but no doubt everyone was thinking of those poor people on the planes, and in the towers where they hit.  We were thinking of the amazing and brave emergency services who would be risking their lives in the carnage as we watched.

But most of all, I was thinking of that nice lady in the restaurant.  I found myself sitting at my desk, tears rolling down my face, just hoping so hard that this day had been her day off. 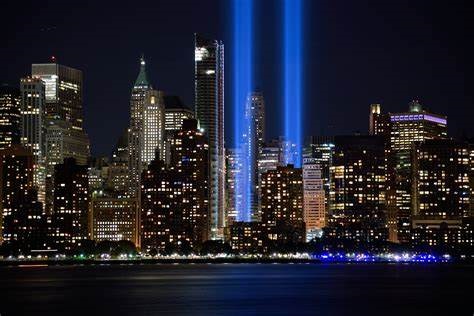 Now, 20 years on, we know the full extent of the horror of that day.  The workers in the towers, the plane passengers and the emergency services; gone, always loved and always remembered.

Never forget and never be defeated by terrorism.

Sending all good wishes to my chums across the pond on this difficult day.
Collapse