Once again, the heathland near my home is burning.  This is a regular occurrence here in West Surrey because there is so much heathland all around us (our corner of Surrey is called Surrey Heath; the clue's in the name!)

However, this one's a biggie.  Fires of this magnitude come along once every five years or so.  It's on an area called Chobham Common which is about 4 miles from where I live.  It's been burning for four days so far, and over half the available fire crews in Surrey are fighting it.

A lot of houses that border that part of the common have been temporarily evacuated, and many local towns and villages, including ours, have a pall of smoke over them.

The fire crews are up there fighting a massive fire in 33 degree heat, in full fire gear, and breathing apparatus.  I admire firefighters at the best of times, but at times like this, I absolutely bow down to them.

In keeping with the positivity that GISH week brings, I donated a bag of fruit juice cartons and muesli bars to the local fire station last night to help keep the guys attending the fires fed and hydrated.  It looks like lots of other people had the same idea because the guy I spoke to was really grateful and said they'd just sent eight car loads of provisions up to the common, and are putting at least four more together!

No-one knows how this fire started, but they almost invariably start due to human carelessness.  We await to see what the outcome is once this is all over and the investigations can begin.  My heart breaks for all the wildlife on the common.  Our heathland is one of the few places in the UK that is rich in hedgehog populations, and those poor little things are ground dwelling, and they're not quick.

This is what I saw when I was driving home from work on Friday:

And this photo is taken from a local golf club, it appeared on a local news website. 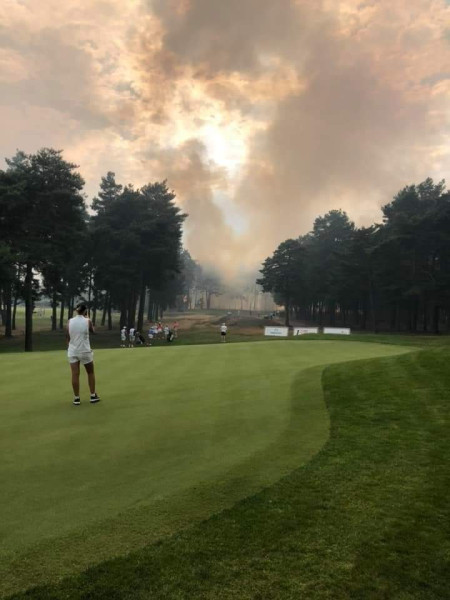 I have faith the fire crews will get this under control in the next few days, although the damping down will go on for a couple of weeks yet.

I just hope that the cost to our local nature is not too high. :(

So I started off this challenge, 10 entries ago with a certain gentleman called Jensen who you may be vaguely acquainted with, so it would bring a lovely sense of symmetry for me to round off with the other J component of J2.