Many of you may be aware that the UK has been visited by 'the Beast from the East', a weather system that has parked it's chilly arse right on top of us and basically buried the UK in snow.  Some parts of the UK such as Ireland, Scotland, Wales and the west country have suffered terribly thanks to the beast, but it has pretty much left no part of the UK untouched.

Now, the UK is not a hot country, that is an accepted fact, but we are a fairly temperate country, and as a result - with the exception of the northern portions of England and Scotland - we don't tend to see a lot of snow, especially here in the south east, just the odd dusting that might stick around for a day or two.

But the downside of that is that on the thankfully very rare occasions that we do get a shitload of snow here, Sam and Dean would feel right at home because it really is like the apocalypse.

Because heavy snow is such a rare event here in the south, there's no infrastructure to deal with it, and British people (me absolutely included) just can't drive in it to save their life.

I don't know if it is still the case, but it certainly was when Mr D worked on the railway; there were only two rail snowploughs in the whole of the UK and they were both based in Scotland, so in the south, the whole railway system routinely fell apart when snow fell - and it still does!

I've been working from home Thursday and today because I attempted to drive the ten miles to and from work on Wednesday.  It took me almost two hours and I was in a state of near-hysteria by the time I got there.

Mr D, bless him is a hero.  I hate snow with a venomous, icy passion.  Mr D loves it.  So, whereas wild horses can't drag me out of the house, Mr D has been out and about and loving it.

In the two days I've been at home, it's also been lovely to see him looking out for our elderly neighhbours; shovelling their garden paths and seeing if they need anything from the shops.

This is our front garden path from Wednesday, after Mr D cleared it, but before the really heavy stuff came down Thursday and today! 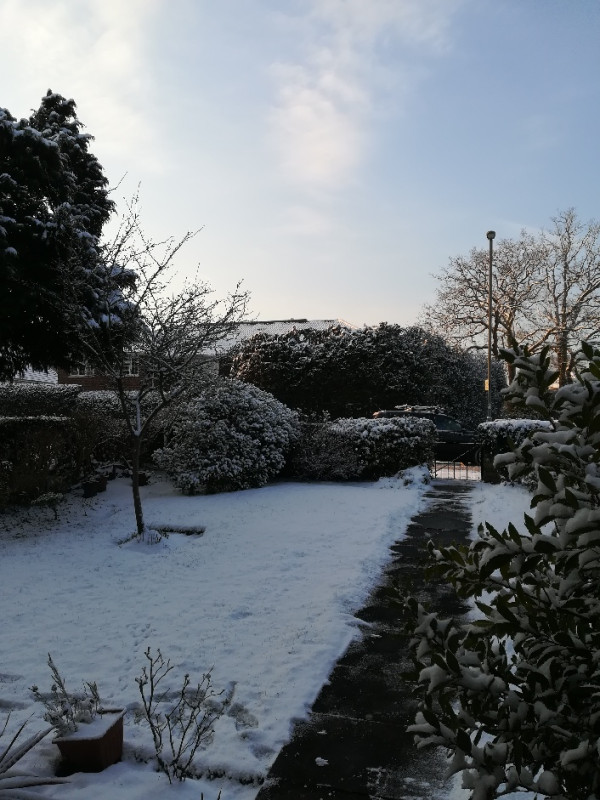 Today, I'd spent the morning working on a fairly mind-numbing spreadsheet, so I actually voluntarily chose to go out with Mr D to walk down to the village for a coffee at lunchtime, and to get a bit of shopping.  Unfortunately, our local supermarket has been picked clean!!  It literally looked like a plague of locusts had descended upon it, so buying food was not a case of menu planning, it was a case of picking up what scraps were available and seeing what we could make of it!