I haven't been following this whole ridiculous drama that's going on about this stupid 'joke' from NOLA Con, but I've seen enough on social media to know the general gist of the situation:

The guys get baited into telling a - probably, in the current climate - vaguely inappropriate joke and now they, Jared in particular, are getting crucified on Twitter by the oh-so-fucking-righteous brigade.

There's a reason why I very rarely go near Twitter; because when that lot get going like a bunch of screaming, demented baboons flinging shit at their chosen target, it's unbearable to watch.

All I will say on the matter is that when those who are shouting the loudest can stand up, look me in the eye and show me that they have NEVER once made an ill-advised or inappropriate comment, or spoken without thinking under pressure, or just - basically - made a mistake, then I'll take them seriously.

But they can't, because they've all done it.  We all have.  Every man, woman and child on the planet has made a stupid misjudgement at some point in their lives - and most of us have the benefit of not doing it in front of a room full of people and five hundred cameras.

So, they'll happily tear down two amazing men who have done wonders for people less fortunate for themselves because of one human misjudgement.  They'll happily tear them down because their voice HAS to be heard - their ego HAS to be let off it's leash. Hang the consequences for J2 and the rest of the fandom.

I hope Jared and Jensen have the strength to weather this storm, and can take comfort in knowing that they can count on the support of the REAL fandom - a fandom which wouldn't exist without them. I support @Jensenackles and @Jarpad 100%.

And as for the Drama Llamas - just go and crawl back under your rock - I'm sure you'll find something else to be offended by soon.

There's so much to smile at and enjoy in this picture, but somehow my eyes can't make it past the v-line the bottom half inch of the picture ... 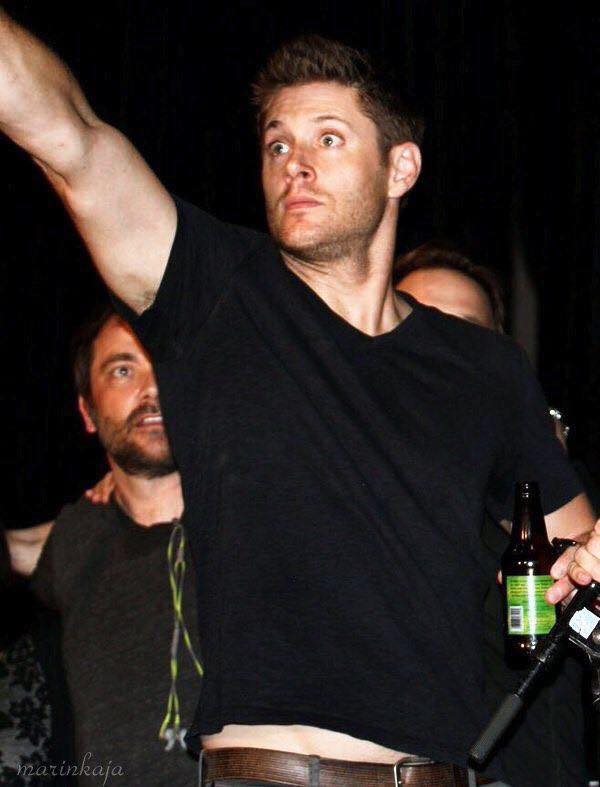