One of Life's Little Problems - Chapter 3 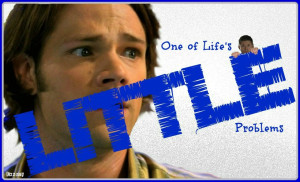 Rooting through the rubble, Sam found everything he could think of that could possibly shed the slightest ray of light on Dean's predicament. He emptied the witch's shelves of books, her cupboards of every vaguely interesting bit of 'stuff' he could find.

Backwards and forwards he marched, tossing it all into the back of the Impala until he could find nothing more to take – he had decided to draw the line at taking the woman's three cats who all sat in the garden and eyed him poisonously as he worked.

All the while, he kept a constant check on his brother who sat, plaid-wrapped, on the kitchen table stewing in moody frustration.

"Right, Impala's packed up," Sam eventually announced, scraping a curling fringe off of his sweating forehead; "I've picked up everything I can find that I think could be remotely helpful. Lets blow this joint."

Sam gently unravelled Dean from the giant overshirt, and slipped it back on, shrugging his jacket on over the top.

Then, carefully picking Dean up, Sam slipped him into the big poachers pocket on the inside lining of this jacket.

Clinging to the top edge of the pocket, Dean peered timidly over it. "I didn't realise how far up you are;" he muttered, and decided that burrowing down into the pocket's warm depths, huddled against his brother's body, was a far better aspect.

For the first time in his life Dean had to reluctantly and ingraciously accept that he was utterly helpless. it was a feeling he didn't like one tiny little bit.

Sam patted his pocket in a discreet show of understanding, and leaving the house behind without a second glance he eased himself into the Impala, making himself comfortable in the drivers' seat.

He took a deep breath. "Okay, so we need to get you some clothes, dude."

"Yeah, amen to that," Dean agreed, folding his arms across his bare chest; "sooner the better."

A moment of thought passed; "do you remember seeing any shops selling dolls house accessories when we drove over here?" Sam asked.

Dean glared over the edge of the pocket, his narrowed eyes glimmering dangerously; "do I look like someone who would notice friggin' dolls house accessories?"

The brothers put a good couple of hundred miles between themselves and the witch's house before they thought about stopping, and It was late afternoon when Sam began to see the bustling sprawl of a small town spreading out either side of them. He pointed the Impala down along the Main Street, busily scanning both sides until he saw exactly what he was looking for.

It was a broad store frontage painted in just about every colour of the spectrum, and a few more besides, Sam guessed. Above its welcoming threshold, in huge, jolly polka-dot letters, it screamed 'Mister Merry's Toy Box'.

He pulled the Impala into a convenient parking space, then glanced into his pocket.

Two tiny green eyes peered back up at him.

"I'm going to get you some clothes bro', there's a store over there that might have some decent stuff."

Dean climbed to his feet still clinging grimly to the edge of the pocket; "come on then," he agreed, "let's go."

"Well I can zip you inside my coat, dude," Sam replied; "but I'm not getting you out in the store."

Dean bristled; "no way Sam, I'm not letting you choose my clothes; who knows what pansyass crap you'd turn up."

Sam was not to be moved. "Sorry Dean, you'll just have to trust me; there's no way I'm getting you out in the store."

Sam would have been prepared to swear Dean stamped his little foot.

Sam sighed; he had far more concerning things to think about than this. "Okay Dean; one, it's dangerous; two, you might get lost; three, you're practically naked and four, the citizens of the USA generally aren't used to seeing ten inch high naked dudes running around in their main streets … you'd cause a damn riot!"

Sam took a deep breath that had 'patience of a saint' written all over it; "and… so you aren't coming out of the pocket."

As if to reinforce his words Sam tugged his jacket closed and zipped it up to his neck.

He tried to ignore the outraged little figure plastered tight against his rib cage and railing and raging inside his jacket, and clamped an arm over the twitching, jerking bulge. Strolling along the Main Street he tried to look as nonchalant as he could manage, softly humming to mask the muffled oaths that accompanied him.

Walking nervously into the store, he tried to be as invisible as possible, well aware that an unaccompanied man walking into a toyshop to buy dolls accessories could well attract the occasional glance. He also realised that having a squirming, ranting lump under his jacket really wasn't conducive to being discreet and anonymous.

He looked down and hissed a quiet plea for calm down the neck of his jacket.

He smiled weakly to the young woman stacking a rack of teddies behind him, and giving him a very curious look

"Uh, my ring tone …" he muttered by way of an explanation, and scampered off before his rising blush risked incinerating her teddy display.

Rounding the top of the aisle, he spied what he was looking for at last, and let out a sigh of relief.

"Knock it off Dean," he snorted into his collar, looking neither right nor left as he made a bee-line for the colourful display ahead of him.

A passing mother with two little ones shot him a dangerous look.

Great, he thought, talking to myself … not alarming at all!

She continued walking past him, her head canted, narrowed eyes never leaving him until she walked straight into a display of jigsaw puzzles, clattering them all over the floor.

Sam wanted to die on the spot.

"The hell was that?"

"Dean, please …" Sam croaked; "people are looking at me as if I'm some kind of friggin' axe murderer."

"Bite me," came the sympathetic response.

"You're not coming out, pipsqueak, so just freakin' deal with it."

Sam's head dropped and he sighed. He just knew Dean had fallen into a sulk. He could practically feel the little dick simmering and scheming and that could only mean bad news for Sam.

Finally he reached his destination, but his brief moment of incalculable relief was suddenly replaced with a slack-jawed gape of horror.

Sam's eyes scanned the seizure-inducingly colourful display in utter bewilderment; why the hell does one little plastic dude need so many friggin' outfits?

Right. Taking a deep breath, Sam squared his shoulders and set about the task in hand.

He perused the range …

'Sparkle Hula Ken' … hmmm, as annoying as Dean could be, he didn't deserve that.

'Disco Dude Ken' … tiny or not, Dean would murder Sam in his sleep.

'Tennis Champion Ken' … uh, nope; previous experience told Sam that Dean in shorts and an alice band is not a pretty sight.

'Safari Explorer Ken' … weelll, the pants and the safari jacket are passable, but the pith helmet? Dean would probably try and forcefeed it to Sam.

Sam eventually settled on 'Denim Dreamboat Ken', a denim jacket and jeans ensemble with a white T shirt, and a 'Cosy Sleepover Ken' outfit that involved a pair of plain grey sweatpants and a blue T shirt with a crescent moon and stars printed on it.

Sam cringed - why the hell are girls' toys so, well, creepy!

It was then he realised that Dean had been worryingly quiet.

He began to walk over toward the checkout when a tiny arm reached up and viciously twisted his nipple.

"OW!" He yelped, doubling over and dropping his purchases all over the aisle; "you little…"

He suddenly realised he was being watched by a bank of wary parents whose pre-schoolers were enjoying a birthday party and systematically dismantling the store in the process.

Wiping the tears from his eyes, he plastered a shitfaced grin across his face; "stitch," he croaked weakly, making a show of rubbing his chest as he picked up the outfits, and stumbled as far away and as fast as he could.

"Dean," he whispered darkly;" you try that again, and I'm gonna throw you to those kids back there to play with."

He was sure he heard a raspberry being blown.

At least, he hoped it was a raspberry.

As he made his way to the checkout he passed a rack of GI Joe dolls, together with their outfits.

Quickly scanning the choices on offer, he figured he couldn't see Dean flopping around in wetsuit and flippers, or biohazard overalls, but a couple of sets of desert fatigues would probably go down very well with his brother.

Sam practically threw his money at the bewildered girl and her nuclear orange baseball cap behind the cash register in his hurry to get out of the store, and rapidly made his way back to the comfortable sanctuary of the Impala, secure in the knowledge that he was now traumatised for life, and that toy stores were forever going to be right up there with clowns on his 'happy to be near' list.

He unzipped his jacket and watched as Dean clambered out of the pocket into his lap, little grabby hands reaching for the shopping bag.

Sam was incredulous; it was like the whole nightmare in the store had never happened. All he wanted to do was slap his brother, but the words 'pick on someone your own size' roiled in his mind. He almost laughed out loud at the thought.

Sam showed Dean the four outfits, and as expected, Dean homed in gleefully on the fatigues.

"Oh man, this is awesome," he grinned as he wriggled into the outfit and spent an age rearranging it so that it was comfortable, only for both seams under the armpits to pop as soon as he raised his arms.

GI Joe clearly needed to work out on the bench press a bit more.

Sam had to smile; Dean looked as pleased as punch with his brother's sartorial choices.

Not pleased enough, Sam noted however, to offer any sort of apology.

It took an overnight drive before the boys reached Bobby's.

Before they hit the road, Sam had called ahead to explain that they had, um, a little problem.

When prompted, he had explained, somewhat mysteriously, that it would be easier to show Bobby that to tell him about it.

Bobby had used the word idjit at least twelve times during the entire four minutes of the conversation.

Having driven through the night, sustained on nothing but a granola bar - at least Dean's nickel-sized share didn't deprive him of too much - Sam was exhausted and famished when they reached the older man's house at some ungodly hour in the morning. Dean, by contrast, had slept soundly in Sam's pocket virtually the whole night and was fresh as a daisy.

Answering the door, Bobby was slightly confused to see Sam, hollow-eyed and dishevelled, standing alone on the doorstep.

"Hey son," he glanced either side of Sam; "where's ya brother?"

Sam sighed, and without a word, pulled his jacket open.

Bobby's eyes widened as Dean's tiny face, by now sporting a tiny layer of tiny stubble, slowly appeared over the top edge of the pocket.

Every trace of colour drained from the older man's face.

It was the only coherent sound he could manage before he crumpled into a dead faint.