A LITTLE something from way back ...

I was trawling through my Fanfiction.net account and came across this little relic from about three years ago that I had a lot of fun writing.  I'm going to post a chapter every couple of days.

ONE OF LIFE'S LITTLE PROBLEMS

Injuries the brothers can cope with; illness, trauma, PTSD? They've done it all with knobs on.

That goddamned skank-tastic witch was one freakin' vindictive bitch.

Not content with persecuting the unfortunate folk of this small backwoods town, she had actually seemed annoyed when the Winchesters turned up on her doorstep inviting her to stop her nefarious activities before she stopped one of their bullets.

And then she had the temerity to look surprised when it all kicked off after she, in return, had cordially invited the brothers to 'go screw themselves'.

Okay, so admittedly, the whole sorry business ended up with them ganking her, but really; there was no need for her to be so damned unpleasant about it. They were only doing their job, after all.

The confrontation had gotten very nasty. Hissing and spitting like a pissed tomcat, she had treated her assailants to a stream of foul-mouthed invective which culminated in a fiery blaze of magical fury, firing both men bodily across the room, and slamming them into the wall.

Just in time, Dean's well-aimed bullet had hit its mark, right between her rage-maddened eyes but not before she had managed to shoot some other powerful, and hitherto unknown, curse in the brothers' direction.

Ducking out of her way, Sam lost sight of his brother as the entire kitchen wall collapsed, dragging with it a collection of hideous framed cat paintings and a massively heavy oaken dresser; it's collective contents, including a set of well-used pots and pans, half-a-dozen rather rancid looking glass jars, two copper ladles, four china cats and a wooden bowl of evil smelling pot-pourri, tumbling and crashing down over the two cowering figures beneath it.

He could only hope Dean had somehow managed to avoid injury in the avalanche of heavy clanging, smashing debris that rained down on top of them.

Clambering timidly out from under the wreckage, Sam coughed and shook a small festival of plasterdust and woodlice from his hair, blinking to clear his dust-glazed eyes, and inched forward on his hands and knees. He winced, cursing as his battered and bruised body protested every move.

Eventually, he rested back on his haunches, softly spluttering through the drifting dust, too dazed to make any kind of realistic attempt to get to his feet.

He scanned the room, still trying to blink some focus back into his hazy, floating vision.

"Dean," he croaked, rubbing his eyes with the back of his hand.

He was answered by stifling silence except for a faint, residual ringing in his ears.

He realised that he couldn't see Dean anywhere in the wrecked room. His brother had completely vanished from view; a not-inconsiderable feat for a man of Dean's proportions.

Cold, hard consciousness snapped back into him in a heartbeat and all at once, he found himself digging through the rubble of brick, splintered wood, and shattered glass with frantic, bleeding hands.

Summoning all his strength, he managed to shift the fallen dresser a few inches and his heart stood still as that small movement revealed the scuffed and dusty toe of Dean's left boot.

A tide of strength crashed over him, and instantly he was clambering to his feet, ignoring his spinning head and battered body, as he clumsily lifted the wrecked dresser and wrestled it aside.

The sight that met him turned his blood to ice.

Dean's dust-coated clothes lay pooled in a crumpled heap amidst the wreckage, but there was no sign of Dean. The stray boot that had first attracted Sam's attention lay, abandoned, several inches from the pile of clothes. His other boot, equally unoccupied, lay on its side inamongst a glittering splash of shattered glass.

Feeling himself start to panic, Sam's eyes widened in frantic horror; where the hell was Dean? What had that bitch done with him?

Scrabbling through the debris, he began to gather up Dean's clothes, still warm from where they had been wrapped around a living body only moments earlier. He searched relentlessly for any sign or clue of what might have happened to Dean, where he might have gone.

He found what he was looking for almost immediately.

And promptly wished he hadn't.

Sam's jaw dropped helplessly and he let out a breathless croak as the power of coherent speech drained away from him.

Blinking, he rubbed his eyes and then stared and gaped moronically all over again. Under the circumstances it was the only response, short of dropping into a dead faint on the spot, that seemed appropriate as his paralysed mind tried to process the bizarre image which confronted him.

Dean sat on the floor looking up at Sam, the expression on his dust-coated face hovering somewhere between slightly dazed confusion and petulant indignation.

Given that Sam was holding his clothes in an untidy bundle under his arm, Dean was totally butt naked; a fact that barely registered with Sam, despite the fact that such a situation, under normal circumstances, would have buried the needle on the brothers' awkward-ometer.

But Sam was fairly confident that these current circumstances could not be described in any way shape or form as being anywhere in the same ballpark, the same galaxy even, as normal.

The figure that sat staring up at him couldn't have been more than ten inches tall. 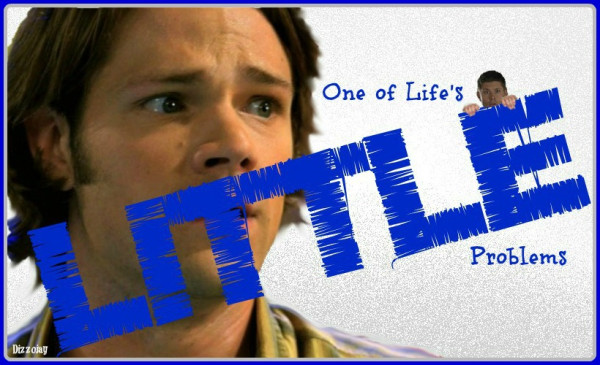