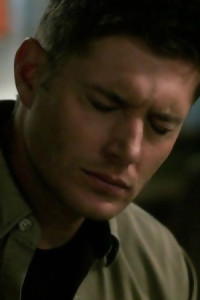 Sam hummed quietly as he worked.

Granted, it was a pretty tuneless rendition of he had no idea what, but Sam thought it might help Dean to relax. It was also proving useful in preventing Sam from busting out into laughter. Because although the whole thing wasn't at all funny …

… it kind of totally was.

Complaints of travellers going missing in a remote wooded area of Vermont had led to the Winchesters spending a freezing, boring-as-crap night in the middle of some godforsaken forest, waiting in nervous anticipation for the chupacabra that Dean had been adamant that they were dealing with.

Except for one small detail.

Instead of the two glowing red orbs and slavering jaws of a chupacabra, they were confronted by a swarm of faeries who clearly didn't appreciate their little abduction games being interfered with.

Sam's initial instinct was to run, but Dean's propensity to fight faeries saw him engulfed by the furious hoard, wheeling and swooping around him, chittering and shrieking as they effortlessly dodged Dean's flailing arms, and Sam's vain attempts to rescue his brother

Pulling Dean's shirt up over his head to disorient him even further, the vindictive little creatures drove him backwards. Still swinging blindly through the maelstrom and swearing up a storm, he suddenly toppled over and with a muffled yelp and frantically windmilling arms, he tumbled ass-first down a small incline straight into a tangled mass of poison ivy.

Thus it was that Sam was here now, armed with a family-sized bottle of calamine lotion and half a ton of cotton wool, standing over his brother who was stretched out face down on a motel bed, his bare back an angry, inflamed mass of itching, burning welts, and his language irritably scarlet to match.

And Sam just carried on humming.