My Asylum began around midnight on Friday night after an epically bad example of time management on my part had me delivering a tutorial to my local art society on Friday evening, and then hitting the road to Birmingham around 10 pm after I’d packed up and cleaned up, complete with easel and half-finished cat pastel portrait in the back of the car!

When I finally arrived at the hotel in the wee small hours, if Viv, my roomie, was expecting the knock on the door to be Jensen turning up to sweep her off her feet, she did a great job in hiding her disappointment when she saw me standing there :)

This was a lovely convention – Rogue got this one pretty much just right. With about 600 attendees, there were enough people to create a nice atmosphere but not so many (as in May) that by the end of it you felt like you’d just battled your way through the shitty end of Mordor on your way to dropping something shiny into a volcano.

And the guest list was great. For once, without any of the great convention triumvirate of Jensen, Jared and Misha, we instead got a great selection of convention regulars such as Matt Cohen, DJ Qualls and Richard Speight Jr, lovely ladies such as Amy Gumenick, Lindsey McKeon and Nicki Aycox, and bewildered newbies such as Theo Devaney, Gil McKinney, Tim Omundson and Adam Rose.

And then there was Jim Beaver (who I kept referring to as Bobby all the way through the event because my brain had stopped functioning beyond basic motor functions by lunchtime on Saturday.)

I have my own personal formula when I go to conventions. Saturday is my photo day, and Sunday is my autograph and panels day, and thus it was that I was in full blue-arsed fly mode all day Saturday taking advantage of all the photo ops that come with the upgrade I’d treated myself to.

Me and those mini-boys got hugged, cuddled, teased and just treated wonderfully by every single one of the guests. I don’t consider myself the most photogenic person on earth, but I’ve got to say, I really love this set of photos; I think the sheer joy of the occasion really shows in my face.

The girls were beautiful, and the mini Boys were very delighted to finally meet their Mum who gave them both a little kiss for the occasion. 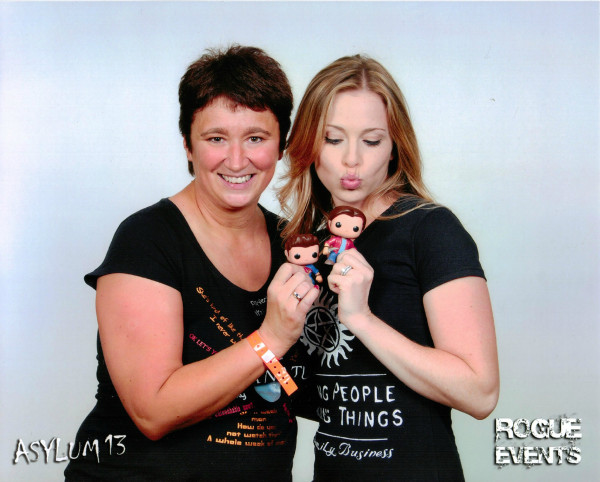 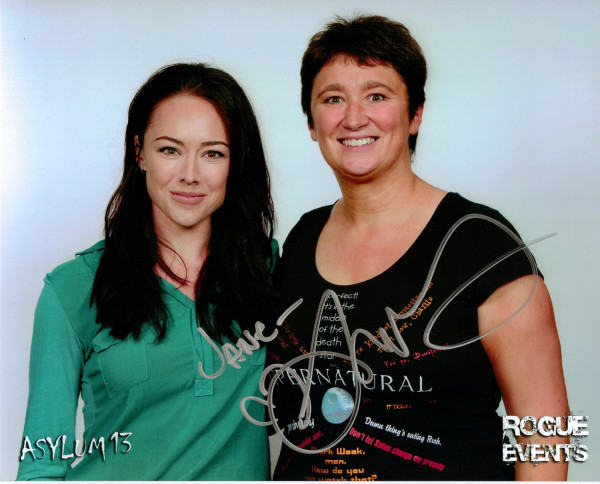 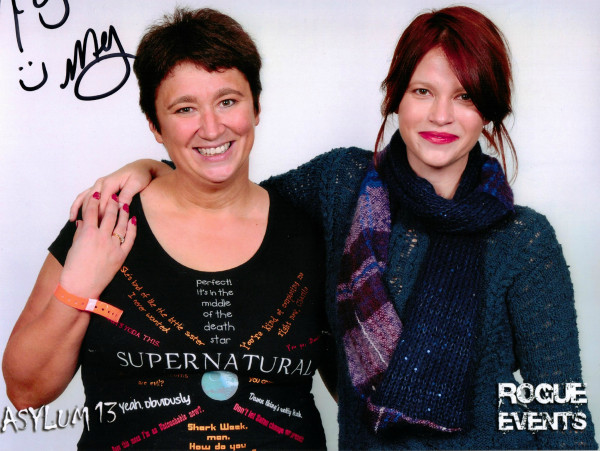 They also met their Dad; I’m not entirely sure what message this expression conveys. 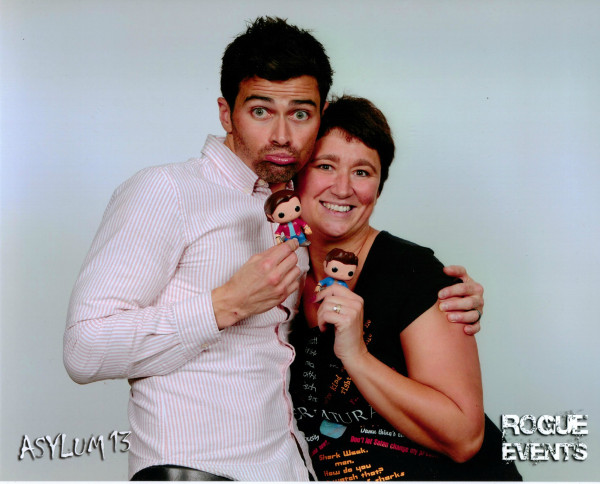 And they met their Grandad who didn’t bat an eyelid when I asked him to shove a four inch plastic doll down his shirt; what a lovely, lovely man! 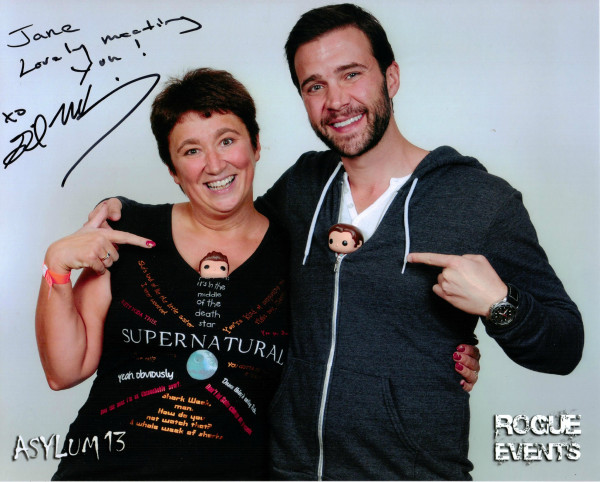 I took the boys next to make sure they’d been Garthed. 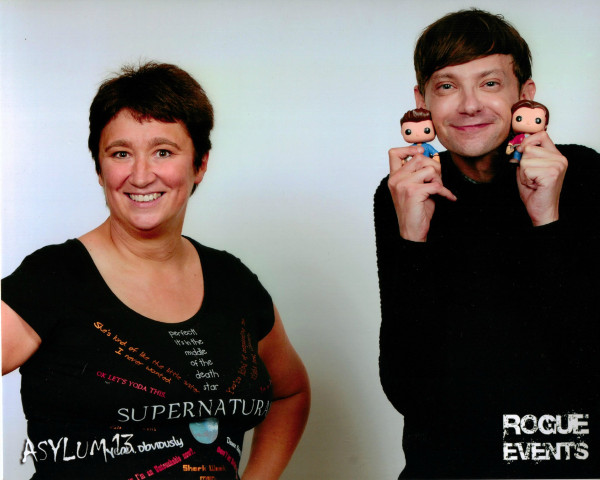 Then I bought another photo-op with DJ to make sure I got Garthed too – after all, why should they get all the fun??? 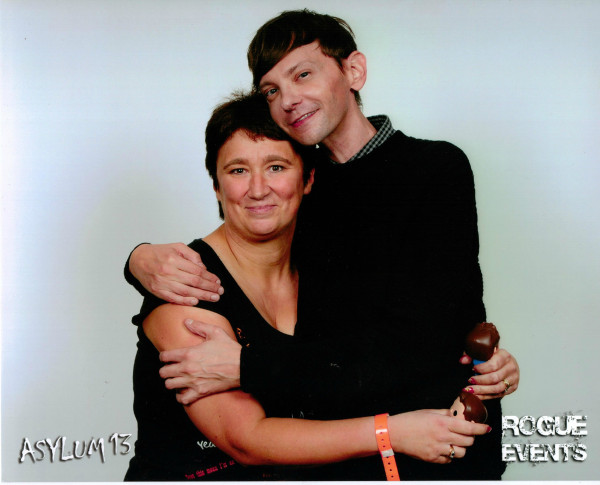 Then the little dudes had a rest when I went to meet Theo and Tim.

Theo was warm and polite, and an all-round sweetheart; and Tim just … well, he hugged. Hard! I didn’t even stage this picture, he just reeled me in, and there I was with a face full of beard before I could even say, ‘hi!’ Not that I’m complaining, mind! 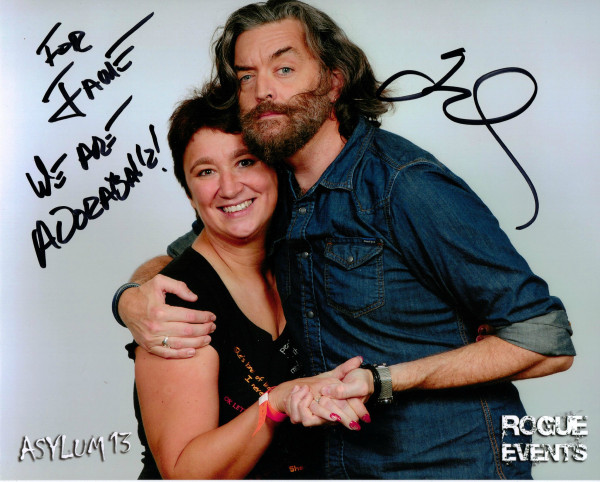 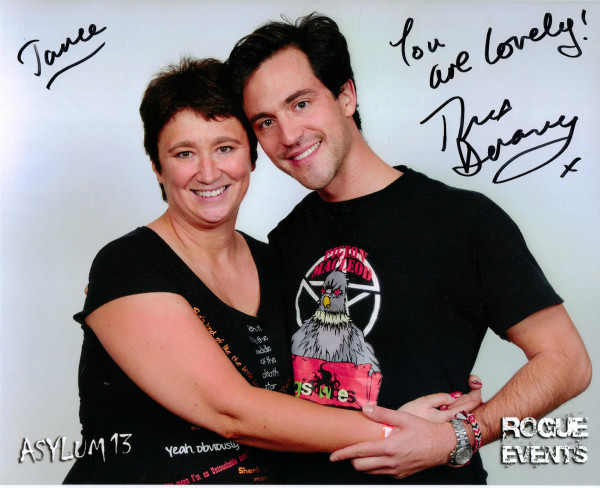 Adam was an absolute sweetie; a true gentleman. and then it was time to meet Jim.

I introduced him to his beloved idjits and he gave them the patented ‘Bobby disapproving eye-roll’. Then I introduced him to myself and got the patented ‘Jim approving hug’. Do I look happy? I think I look happy! 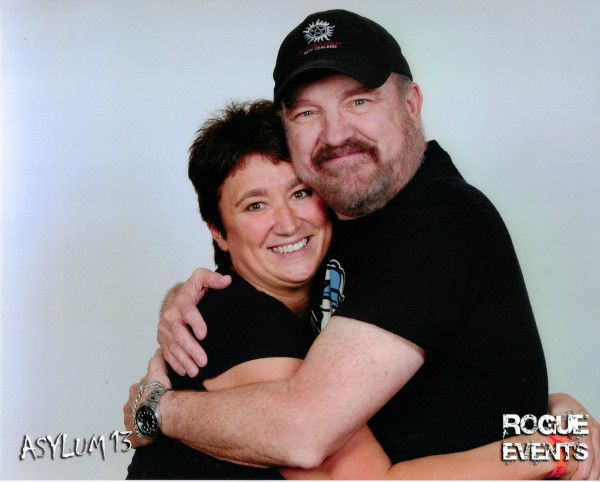 Final photo op of the day was with Richard, so I took Cas to meet a fellow angel, and realised it’s very difficult to click your fingers when you’re holding a very small angel at the same time! 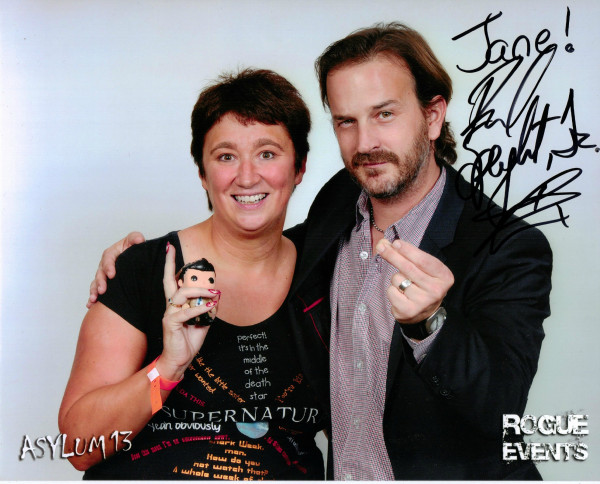 The Saturday evening was just spent, chilling out, bopping the night away and singing (very badly) at karaoke (and no, we didn't sing 'I'm Too Sexy'), and rewatching 10.02.

As one of life’s tactile people, I really love all the hugs and squeezes that go on in the photo ops, but I also love the autograph sessions. It gives you your few seconds to connect with the actor. Again, the benefit of having less people at this con was that you got a liitle bit longer to have an exchange that could almost be classed as a proper conversation (if you squinted a bit).

I had done some artwork for a few of the guys to sign. I always hope they are flattered by the fact that I take the time out to do something to honour them in this way (whether or not they think it’s any good), and usually, it’s just nice to see the pleasure on their faces when they see my efforts.

This time I was totally overwhelmed by the reaction my art got; bloody Adam Rose, the adorable man, nearly made me cry; (I thought he was going to cry at one point). He took photos of his picture on his phone, then asked me if I had a copy that would be good enough for him to put on display. I told him I always take a scan which is pretty good quality, and the upshot is I’m going to tweet it to him tonight.

Jim and DJ were equally gracious about their pictures, and so were Amy and Matt. 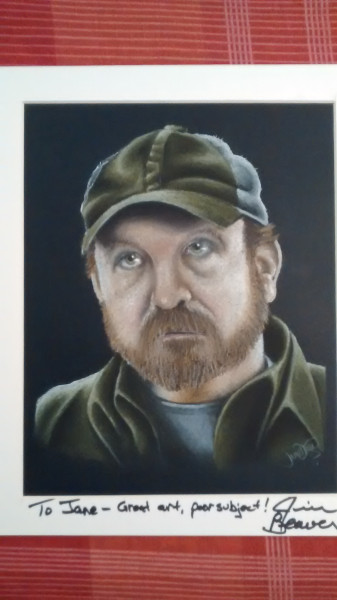 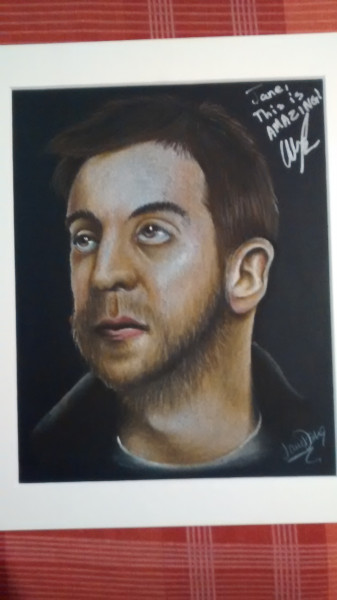 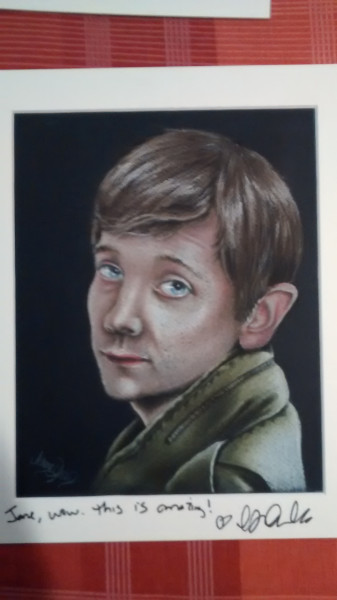 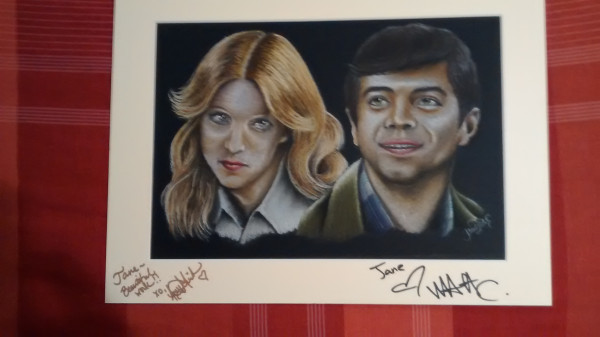 I think I must point out that at the auto session, I may have fallen everso slightly, just a little bit in love with Theo Devaney! He’s a Streatham boy, and as a Lambeth girl, we connected immediately - kindred South London spirits!

He told me he really loved my photo with him; and said that it looked like I was being really, kind and sweet and protective to him.

I told him I was being protective; it was his first con and we all wanted him to have a wonderful experience. (It was an act of total selfishness, of course, because I want him to come back).

After one last photo op with Jim and DJ, I headed back to the main hall and collapsed into my seat in a dishevelled heap to watch all the remaining panels until the end. 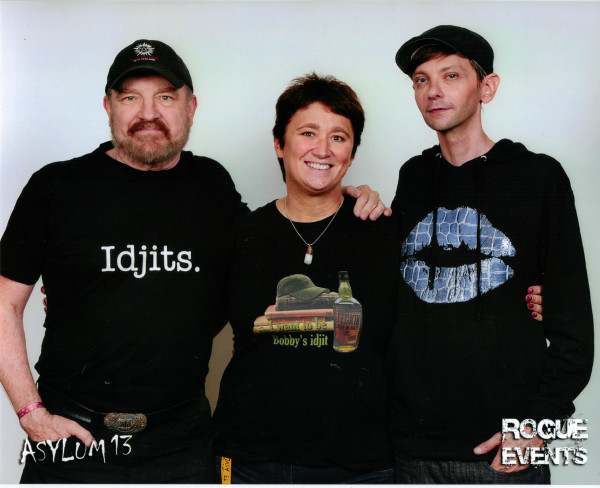 At the end of everything that day, I passed Theo in the corridor on his way out and wished him a safe journey. That earned me a hug and a kiss – and I hadn't even asked!!

After a quiet couple of hours winding down and catching up with some friends over a couple of bowls of chips, I reluctantly hit the road back down south, eventually getting home just after 9 pm.