Here's a little something that I wrote last night ...

Dean thinks a long way outside the box for this hunt - he can't understand why Sam's not impressed!

This had to be the stupidest hunt in a whole lifetime of stupid hunts.

It started with newspaper reports of guys being found dead under mysterious circumstances within the drab, grey walls of an abandoned warehouse; one security guard, two hobos and an unfortunate teenager looking for somewhere to have a sneaky smoke, and finding a lot more than he bargained for.

Oddest of all, each and every one of these unfortunate men had died with a very broad smile on their face.

It didn't take the Winchesters long to figure out what was going on; the place was haunted by a succubus; a nefarious spirit that fed on the sexual energy of men.

Research was painstakingly researched and as a result, it wasn't long before Sam had hatched a plan …

"Come again?" Dean stared at his brother; "I didn't understand that, I don't speak stupid."

Sam shrugged as he looked at Dean over the dusty pile of books cluttering the table in front of him. "This thing's invisible," he sighed, speaking slowly lest Dean make him repeat himself again; "we can kill it with a copper bullet when it manifests, but the only way we're going to be able to make it manifest is to … um …"

"Do go on," Dean prompted flatly.

"… get it aroused," Sam muttered in a small voice, fiddling awkwardly with a well-chewed pencil. "When it's … uh … aroused," Sam mumbled, growing a deeper shade of scarlet with every word that emerged from his mouth; "it manifests so that it can, y'know, do it's thing."

"So you want one of us to make out with this freakin' creepy succubus bitch?"

"Well, I, uh …" Sam's tongue appeared to have lost the ability to form words in coherent English.

"Of course, it'll have to be me, won't it?" Dean snorted; "if we wait for you to get it hot under the collar, we'll be there until we're freakin' ghosts ourselves."

The abuse bounced off Sam like spring raindrops; it was no more than he would have expected.

"Shut up asshat and listen, this is important," Sam snapped, his coyness momentarily erased by his concern; "you can't let it touch you. You can't touch it. If it touches you, it's got you; it'll wring you out like an old dishcloth."

He stared across at Dean's blank face.

"Yeah," Dean snorted; "got it. I've got to go all 'Harry met Sally' on some creepy, invisible fugly bitch, and stow the touchy-feelies while I'm doing it."

"Piece of cake," he sighed from under an ironically raised eyebrow.

The ancient iron door gave a pained squeal as the brothers stepped from the day's bright sunshine into the dank, cobweb-strewn interior of the derelict warehouse. The huge dark space swallowed them like a gaping maw and left them blinking blindly through the gloom.

As their eyes slowly became accustomed to the darkness, they gradually began to orientate themselves; Dean pointed upwards to a rust-coated metal gantry suspended high on the wall behind them.

"Get yourself up there," Dean whispered; "you'll have the best view to get a good shot in when she shows up."

Dean scowled; "Sam will you beat it so that we can get this freakin' farce over and done with?"

After a brief hesitation, Sam nodded smartly, turning and heading through the murky shadows toward the gantry.

Watching him go, Dean pulled in a deep breath, wrinkling his nose in disgust at the stale mustiness of the fetid air around him, and pulled his phone out of his pocket.

Sam watched from his vantage point as Dean fiddled with the handset, brow furrowed in concentration. "C'mon Dean," Sam muttered irritably, his finger curling slowly around the trigger; "this is no time to be sending goddamn text mess …"

His words were cut off in disbelief as the tinny strains of J'Taime emerged from the tiny device which Dean had placed on the ground beside him.

"Okay," Dean yelled up into the echoing darkness around him; "you wanna treat bitch? I'll give you a treat. Feast your freaky eyes on this!"

Sam's jaw slowly worked its way down to the metal handrail he was leaning against as he realised what Dean was about to do.

Lazily rocking to the slow hypnotic melody, Dean pulled his dark blue button-down back, first over one calmly gyrating shoulder, then the other. The coarse fabric slipped down his arms, slithering to the floor behind his feet. Almost instantly, his hands gripped the hem of his black T-shirt and pulled it oh-so-teasingly up over his sinuously swaying torso; the faint light from the partially open door softly illuminating the cut of his muscles, the contours of his ribs as he moved.

"No-no-no-no-no …" Sam shook his head helplessly as he stood on the gantry, his rifle slipping in his sweaty hands; "you're not giving the succubus a goddamn, freaking STRIP TEASE!"

But it was clear that was exactly what Dean was doing as his broad shoulders suddenly bunched and he yanked his T-shirt over his head, swinging it briefly around his tousled crown before tossing it away into the shadows.

Sam's forehead hit the handrail with a hollow 'clang'.

It was when Dean's hands reached for his belt buckle that Sam felt his gorge rise, and he had to fight back the overwhelming urge to turn the gun on himself. There were things here he was never going to be able to unsee; there wasn't enough brain bleach in the world.

Sam looked up just in time to hear the faintest snap of a button fly being undone, and saw the impish grin on Dean's face as, with a languid roll of his slim hips, Dean's jeans pooled at his feet with a heavy rustle and a jangle of belt-buckle.

Stepping out of the puddle of denim, Dean moved as seductively as it was possible to when wearing a size-twelve workboots and boxer shorts combo, and turned his back, hands resting on his hips, deliberately forcing the impressive muscles across his bare back to bunch impressively.

"Don't-you-dare-don't-you-freaaakin'-dare…" Sam mouthed silently as he saw Dean's thumbs thread into the waistband of his boxer shorts, but his desperate pleas were in vain as Dean slowly worked the elastic down until Sam, against his better judgement, was staring through the murk at two pert, round ass cheeks … and what the hell? how long had Dean had that Bugs Bunny tattoo?

He was so stunned by the trauma that he was currently being subjected to, that at first he barely noticed the succubus as she materialised beside Dean; her long, fleshless talons reaching out toward him.

Momentarily shaking himself back into the now, Sam loosed off a shot, blowing the succubus to smithereens and, in the process, grazing Dean's left butt cheek, leaving a faint scorch-mark right next to Bugs.

Sitting around the breakfast table, sated by orange juice and muffins, Dean was leafing idly through a copy of Musclecar weekly. Sam was glad to note that he didn't appear to need the cushion to sit on any longer.

Taking advantage of this quiet time, Sam was browsing his laptop for likely jobs; preferably ones that wouldn't involve the removal of any part of Dean's clothing.

Besides, Dean had argued without a hint of contrition, the warehouse was abandoned and there was no-one about, so no-one saw Dean's performance apart from Sam and the succubus. Given that the succubus was, right now, a stone-dead doornail thanks to Dean and his freakin' AWESOME ass, he really didn't see what Sam had pitched a bitchfit about.

Sam stared at his laptop screen and tried to stifle a laugh.

Apparently the warehouse wasn't as abandoned as they thought.

Apparently, the surviving security guard had access to a CCTV system …

Sam stared at the shadowy butt-cheeks gyrating away on the screen; the ones that were currently going viral on the internet. 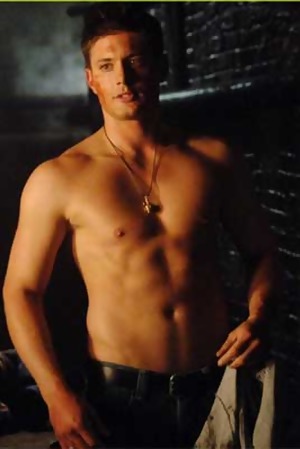