Here's a little something I wrote almost exactly a year ago, and because the world can never have enough shameless Dean appreciation, I decided to give it another airing!

A/N I read a book on Celtic folklore a while back about Wayland Smith; the legendary blacksmith of Celtic mythology, and I got to thinking - what makes a good blacksmith? You need to be strong, fit, skilled with your hands, have powerful arms and shoulders, be unafraid of fire, prepared to get your hands dirty, and above all you need to be good at hitting things.

All this seems to indicate that Dean Winchester would make a great blacksmith.

I stand and watch entranced as he gently files rough edges from my horse's hoof, muttering soothing reassurances to her. Dropping her leg, he turns, stilling her with a soft pat on the neck before he returns to his forge, the bent horseshoe gripped between the tongs in his hand.

As he plunges the shoe into the forge, the incandescent coals bathe his handsome face in an amber patina, throwing shadows under his highly arched cheekbones and highlighting the sheen of sweat across his grime-streaked skin. It gives him an otherworldly visage as the glow from the seething embers flickers in his moss-green eyes.

Like the living kin of Vulcan, he is a master of fire and flame; standing tall and imposing, surrounded by dancing vermillion sparks and drifting smoke.

I don't even see him take the molten shoe from the flames and place it on his anvil.

Yet I am not afraid of him.

I stare through the veil of swirling smoke, to see firm muscles bunching and flexing across broad shoulders, barely contained by the sweat-soaked T-shirt that clings to his body like a second skin. Its moist fabric traces ever contour, every plane of that powerful chest tapering down to his narrow waist, and I drink in the sight like a man dying of thirst.

His raw power is brutal, somehow primitive; there is nothing forced or manicured about this man. This is a body honed through forging iron, not pumping iron.

Once again the hammer is brought down upon the darkening edge of the glowing shoe, the dissonant song of iron upon iron, each blow accompanied by a visceral grunt of effort and my eyes lock onto a bead of sweat that trickles from his hairline down across his temple. I watch as it slowly follows the curve of his stubbled jawline before he raises a gloved hand and wipes it away, leaving a smudge of charcoal to mark its demise.

I quietly mourn its passing.

Once again, his arm is raised, poised to strike another blow. I notice the golden hair that coats his long, corded forearm is stunted and crinkled by a lifetime's exposure to this searing heat, and I gnaw my lip as the arm descends, striking another ringing blow to the cooling metal, sending a wave of shock through his lean, solid frame and eliciting another hoarse grunt.

I watch in rapt awe as he leans forward to examine his work, and my eyes settle on the sliver of tawny skin that is exposed as his damp shirt creeps up his back. I feast hungrily on the slabs of muscle that lie either side of the sweat-slicked nook of his spine.

So stupefied I am that I don't see him lift the re-shaped shoe off of the anvil and plunge it into the water butt beside him. I hear the screaming hiss of the escaping steam and my heart leaps into a dizzying cadence; I have to grip the doorframe to stay on my feet.

He looks up at me, concern darkening his eyes; "you okay?" he asks hesitantly, deep, melodious voice as warm and gentle as dawn, as dark and dangerous as midnight; "is it the smoke?"

I nod mutely with a watery smile.

Is there smoke? I don't remember.

He draws the shoe from the water butt and walks toward me, his sweetly-bowed stride languid and casual. As he approaches, I taste the faintly sweet musk of his perspiration, and I am drawn to some tiny beads of moisture standing out on his upper lip. I have only a second to enjoy them before the tip of a pink tongue emerges from between his plush lips and sweeps them away.

I miss them already.

I study him, memorising every inch, every contour; appreciating every nuance of his face, greedily claiming it for myself, locking it away securely in my mind's eye for later, for a time when he is no longer near me. His outline is lean and fluid beneath the damp fabric that caresses it so tightly and so indecently; my eager eyes take in those mighty shoulders, a work of art in themselves, sweeping down over the generous curves of his biceps, the broad swell of his chest, and linger over the faintly contoured planes of his flat stomach slowly guiding me down to the well-worn belt hanging low and loose on the faded denim which sits comfortably over his narrow hips.

Suddenly the world has shrunk to me and this beautiful man.

Now it is my turn to perspire. A burning heat rages through me as I feel the palm of his hand gently resting in the small of my back, guiding me outside. I whisper a silent invocation that he won't feel me tremble beneath his touch as he walks with me, murmuring something kind about getting some fresh air while he shoes my horse.

Back at the stable, as any good owner should, I check my horse's feet. I check that her feet are clean, her hooves are oiled and that her shoes are sound.

I'm disappointed to find her shoes all in perfect condition

I need to find a reason to go back to him. 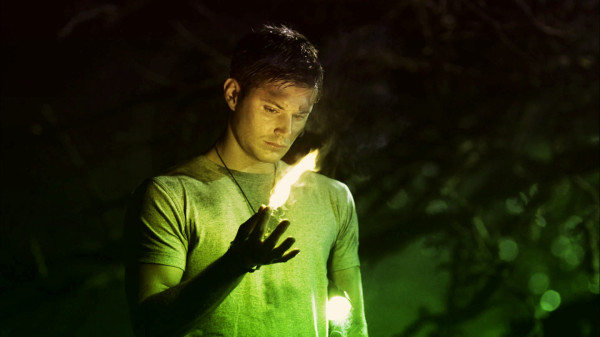 And ... here's Dean with some fire.  Thanks for reading!