Wishing the Happiest of Birthdays to Amber1960, my Partner-in-Supernatural!

Here's a little bit of birthday fun for my great buddy

IT'S NOT THE SIZE THAT MATTERS …

Disclaimer: I don't own them, I just borrow them for fun and larks.

Sam had barely stepped into the bunker, locking the heavy door behind him when he heard a long, pained groan.

Pausing cautiously, he glanced over the side of the gantry and dropped his shopping bag, eyes widening in horror at the sight of Dean writhing miserably on the floor below clutching his shoulder.

Forgetting the scattered groceries, he thundered down the iron staircase six at a time and skidded to a halt, dropping to his knees beside his brother's prone form.

"Uh," Dean's teary eyes glanced around the room shiftily before settling back onto Sam's concerned face. "Chupacabra," Dean blurted; "got out of the vaults." He winced dramatically as he tried to sit up but was prevented from doing so by a large hand planted across his chest. "It was a freakin' big bastard;" he sighed; "must'a been eight feet long, weighed four hundred – at least."

Sam's brow furrowed in confusion; "chupacabra? But, what chupacabra?"

"It was in one of the deeper vaults we haven't got around to indexing yet." Dean continued, his voice tight with pain; "I thought it was hibernating, but it wasn't." He groaned, pulling in a deep breath before continuing. "It jumped me, an' it was all massive teeth and claws and poisonous spit. I fought it off with my bare hands," he held up said hands – undamaged, Sam noted – as if to reinforce his point; "and I managed to wrestle it down but just as I was reaching for my knife, damn thing threw me off balance, into the wall and ran off through a, uh, drain – yeah, a storm drain."

Sam's eyes narrowed suspiciously; something about this story didn't ring true. Like every word of it.

"Managed to drag myself up this far before the pain got too much," Dean croaked wearily; "then I blacked out."

Sam scraped a hand over his face; "uh, okay, bro', let's get you sitting up so I can reset this shoulder."

Dean nodded queasily, tensing in pain and grimacing as Sam wrapped a long arm around him, tenderly lifting him to sit up in one of the nearby dining chairs.

Closing his eyes, Dean leaned against Sam and nodded, biting down on his lip.

Dean pulled in a shaky breath.

The countdown was interrupted as Kevin's diminutive form scurried into the room clutching the first aid kit.

"I'm so sorry, Dean;" he blathered, his chocolate brown eyes swimming with guilt-ridden tears; I didn't mean to hurt you, it's just that the Twister mat slipped when my head was under your arm and, I've put it away now, like you said so Sam won't need to find ou …"

Kevin froze; physically shrinking, as if that were ever possible, in his panic.

A/N Yes, I know in the real life recent events that I refer to it was the mighty Jared who was felled by Osric (hereinafter known as 'Master Chau'), but, well, Dean does pain so prettily - I couldn't resist ... 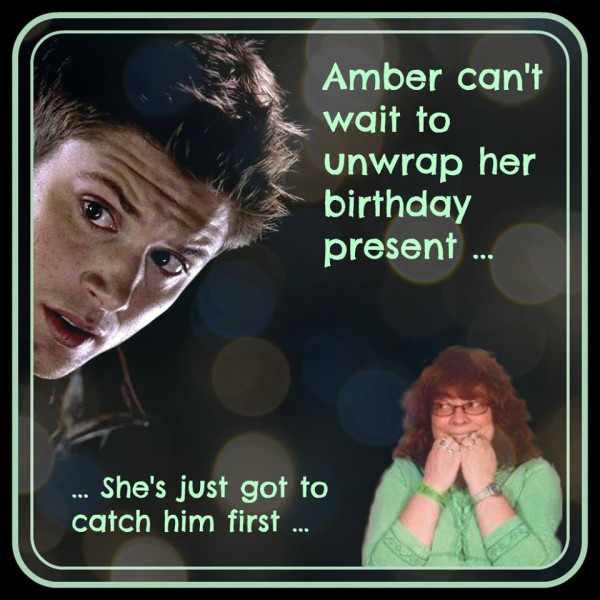