The Host with the Most

THE HOST WITH THE MOST 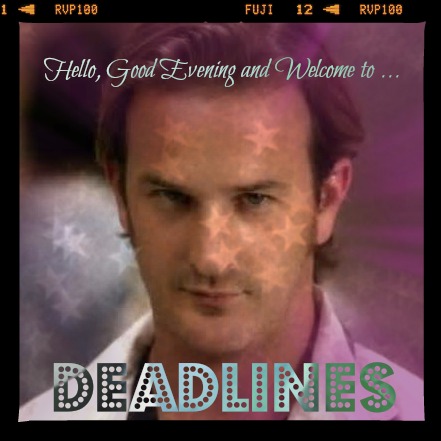 "Good Evening Ladies and Gentlemen, and welcome to 'Deadlines' the show that puts the DEAD in deadline!"

"I'm Dickie McTricky your host for this evening, and without further ado, let's meet tonight's contestant … Sam Winchester; give him a warm welcome everybody!

"Where you from Sam?"

"Oh, I don't know that place," turns to camera; "is it near Massachusetts?"

"Okay, I can see you're keen to get the ball rolling, so here's some footage we filmed earlier."

Screen shows a struggling and angry Dean, strapped tightly, face up on a stone slab in a dungeon; a huge curved blade slowly swinging side-to-side high above his midriff.

"Okay Sam; here's your deadline; you've got three hours to find and rescue your brother before my descending pendulum descends far enough to turn him into your half-brother."

Sam's fists clench in fury as he glares at Dickie McTricky.

"Sam, we've got a deadline here. There's no time for standing around gawking at me; you can get my autograph after the show. "

"Hello, I'm Dickie McTricky, and we've got a first here on 'Deadlines'!"

"I gotta say, throwing the Veritas truth curse at me was really thinking outside the box there, Sam."

Camera pans back to reveal Dickie McTricky stretched out on the slab beneath swinging blade; Winchesters standing beside him, smiling in wicked satisfaction.

"I guess we're a cut above your other contestants," Sam adds.

"Well, you've been great contestants guys; but you can untie me now."